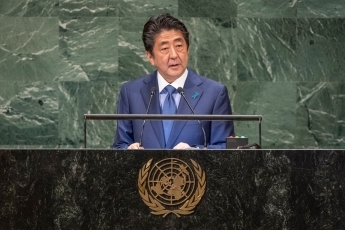 I have been accorded the privilege of continuing to serve as Japan's helmsman for the next three years. As I address the General Assembly today for the sixth consecutive year, I do so with a feeling of renewed resolve.

In the three years to come, I will do my very best to strengthen the free trade system. I will likewise do everything in my power to clear the postwar structure from Northeast Asia.

Serving as a flag bearer for free trade

In my view, the Japanese people have eagerly hoped for their national leaders to serve as flag bearers for free trade. This is because after the war, Japan itself was a nation that enjoyed remarkable growth, basking in the advantages of trade as the beneficiary of a free and open economic system.

The free trade system enabled the countries of Asia, one after the other, to achieve take-off and fostered the middle class in each of these countries. In the background was the large-scale direct investment Japan has made in these countries since the 1980s.

In all these cases, this was possible thanks to the international economic system being rules-based, free, and open.

Should Japan, the country that reaped the greatest benefits of all under this system, ever fail to support maintaining and strengthening that system, who else should we wait for to rise in support of it? Japan's responsibility is tremendous indeed.

That is also Japan's mission, rooted in its own history.

Other than coal that supported modern Japan's industrialization, our nation has had no other resources to speak of. But upon devoting itself to reaping the blessings of trade, post-war Japan succeeded in realizing growth that was called a miracle, even though it lacked resources.

The very first country to prove through its own experience the principle that exists between trade and growth -- a principle that has now become common sense -- was Japan. Japan has now taken on the mission of imparting to the world the benefits of trade.

I have at times risen above intense debates domestically, waving the flag of free trade. There has been no greater joy for me than when TPP11, took final shape and was quickly approved by our Diet. In addition, Japan and the European Union have signed an Economic Partnership Agreement that is of a scale and scope worthy of special mention in world history.

But that said, we must not be complacent. I must drive my efforts up a notch, aiming still farther into the distance.

In addition to Japan's commitment to the World Trade Organization, which is a given, I will make all-out efforts towards negotiations on the "RCEP," which will give rise to an enormous free-trade area in East Asia.

And, more than anything else, I value our new trade talks with the United States, dubbed the "FFR" trade talks.

For many a year, both Japan and the United States have led the free trade system forward internationally. As evidence of that, Japan's direct investment has created employment in the U.S. for some 856,000 people nationwide, a quantity second only to what the U.K. has brought about.

This is a win-win situation at its finest. I intend for Japan and the United States to continue this kind of relationship between us.

But this is hardly unique to our bilateral ties with the U.S. Under the flag of free trade, Japan has with any country and any region built up relations in which we each can be of assistance to the other. We will continue to do this going forward.

In order to expand free and fair economic rules befitting to the 21st century into the vast region extending from Asia and the Pacific to the Indian Ocean, the countries that have created the system and reaped the greatest benefits from that system -- that is to say, countries like Japan -- must lead the effort. That's what I believe.

Just a few moments ago I stated that I will do everything in my power to clear the long-standing postwar structure from Northeast Asia.

I am now, together with President Vladimir Putin, working to get the deadlock between our countries that has seen no movement for more than 70 years back into motion again. President Putin and I met at the beginning of this month in Vladivostok. This was our 22nd summit meeting. I will meet him again in the near future.

We must resolve the territorial issue that lies between Japan and Russia and conclude a peace treaty between our two countries. Once a Japan-Russia peace treaty comes into existence, the peace and prosperity of East Asia will attain a more certain cornerstone.

Ladies and gentlemen, from this very location at this time last year, I strongly urged North Korea to resolve its abductions, nuclear, and missile issues. As someone who appealed for the full implementation of all relevant UN Security Council resolutions, I pay the greatest interest in changes of North Korea.

North Korea is now at a crossroads at which it will either seize, or fail to seize, the historic opportunity it was afforded. North Korea has both untapped natural resources and a labor force whose productivity can be greatly enhanced.

Japan's policy of seeking to settle the unfortunate past and normalize its relations with North Korea once the abductions, nuclear, and missile issues are resolved will not change. We will be unstinting in our assistance to unleash the potential North Korea holds.

However, I must reiterate one thing time and time again. We will bring about the return of all Japanese abductees. I am determined to make this a reality.

In order to resolve the abductions issue, I am also ready to break the shell of mutual distrust with North Korea, get off to a new start, and meet face to face with Chairman Kim Jong-Un. At present, nothing has been decided regarding a Japan-North Korea summit meeting, but if we are going to hold one, then I am determined it must be a meeting that contributes to the resolution of the abductions issue.

I wish to comment briefly on Japan-China relations as well. The mutual visits at the leaders' level that began this year will continue, with me visiting China next month, to be followed by my inviting President Xi Jinping to Japan, thereby adding to our bilateral relations and to the entire region another definitive axle for stability.

When the confrontational structure is cleared out of Northeast Asia, the maritime corridor running from the Arctic Ocean to the Sea of Japan, through the Pacific Ocean to the Indian Ocean will become increasingly important.

Japan, located directly above it and also possessing a vast exclusive economic zone, hopes for stability and peace in these waters as well as in the airspaces above them.

The countries of ASEAN lie at the "confluence of the two seas" -- the Pacific and Indian Oceans. And it was the forerunners living in what we now call the Pacific island countries who in eras long past crossed these two oceans to introduce products to faraway eastern Africa.

What I call the "Free and Open Indo-Pacific Strategy" derives from our desire to preserve the blessings of open seas, together with these very countries, as well as the United States, Australia, India, and others, and indeed, all countries and peoples who share the same intent.

What must control our sea and air spaces that are broad and wide is the rule of law, and the rules-based order, which are in turn backed by solid institutions. Hence my strategy.

The other day, foreign students in Japan proudly returned to their home countries of Malaysia, the Philippines, and Sri Lanka with new academic degrees in hand. These degrees were master's degrees that can only be obtained in Japan.

They are master's degrees in maritime safety and security policy. In addition to the students the Japan Coast Guard sends to the program were senior officials from various coast guard authorities in countries all around Asia. The students who graduated the other day were in the third cohort of students to enter the program.

Maritime order is not a matter of power, but a matter of the rule of law and one that is rules-based. Every year a class learning such an everlasting truth and taking it as a guiding principle for their lives will head out from Japan to the seas. This is very promising indeed. Cultivating those who will protect and defend a free and open Indo-Pacific is, precisely, Japan's noble mission.

Ladies and gentlemen, as I was preparing this address, I created a new but modest program.

At the beginning of 2019, we will invite to Japan approximately ten elementary and junior high school teachers from the Gaza Strip. This will be the first such group and we will continue to invite teachers annually.

Teachers who find themselves in Japan, a place so different for them both culturally and historically, will naturally put the situation in Gaza and the Middle East into a wider perspective, enabling them to see their own hometowns and region anew. Such an experience should somehow work in a unique way as a solace to them.

It goes without saying that for peace, efforts must be made on both sides. But hopefully this program of ours will impart a means of hope to the teachers from Gaza and the children in their care.

Once 20 years pass, there will be 200 teachers who will have experienced visiting Japan. The number of students taught by them will number in the thousands. I look forward to that day.

Japan and the Japanese looking intently at the future

The goal of Japanese diplomacy, which I conveyed to you to some extent today, is to make the future of the world and the region something that is certain.

In addition, what I wish is for the young people who will live in the Japan of the future to vigorously take on challenges. The duty of our generation is to create an environment that facilitates this.

It is as if a new breeze is now about to blow in Japan.

From the end of April next year into the beginning of May, His Majesty the Emperor will abdicate and His Imperial Highness the Crown Prince will accede to the imperial throne. In fact this is the first imperial succession in 200 years to accompany the abdication of the current Emperor. In October we will welcome guests of honor from around the world who will come to extend their good wishes.

Next June, Japan will host the G20 summit. As the chair of the meeting, I intend to lead the discussions about issues facing the international community, including the state of the global economy and environmental issues.

Soon after, in August, Japan will host the Tokyo International Conference on African Development, or "TICAD." This will be the seventh time to hold this summit, which Japan has continued to hold with great care since 1993 and which has earned unwavering trust from national leaders all across Africa. For example we will discuss with each other "universal health coverage," whose importance I have highlighted a number of times.

And lest we forget, next year Japan hosts the Rugby World Cup, and in 2020, Tokyo hosts the Olympic and Paralympic Games. Our eyes will continue to be fixed on the future.

When Japan and the Japanese people fix their gaze squarely on the future, Japan increases in vitality. Japanese looking intently at the future will become people who determinedly take on responsibility for achieving the SDGs. Such next-generation Japanese youth will work commendably as flag bearers for the "UN spirit." I am absolutely certain of that.

In closing, I will state that in light of the lack of progress in reforming the Security Council, the significance of the United Nations in the 21st century world is already being starkly questioned.