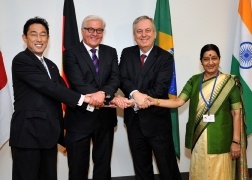 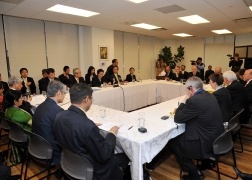 On September 25, 2014 (local time), the G4 Ministerial-level Meeting (chair country: Brazil) was held in the Consulate-General of Brazil in New York for approximately one hour, on the margins of the 69th United Nations General Assembly. An overview of the discussions is as follows (participants from each country were Mr. Fumio Kishida, Minister for Foreign Affairs of Japan, Ms. Sushma Swaraj, External Affairs Minister of India, Dr. Frank-Walter Steinmeier, Federal Minister for Foreign Affairs of Germany, and Mr. Luiz Alberto Figueiredo Machado, Minister of External Relations of Brazil). Following the meeting, a joint press statement of the G4 was released (see attachment for the full text of the joint statement).