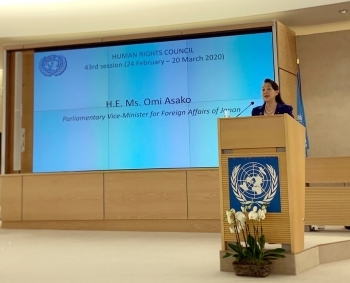 It is my great honor to have this opportunity to make a statement at the Human Rights Council on behalf of the Government of Japan.

First of all, I would like to make a comment regarding the response to the novel coronavirus, or COVID-19, which is an urgent issue in the international community. With regard to the cruise ship “Diamond Princess”, Japan has been taking measures with maximum consideration for ensuring the health of the passengers and crew of the ship regardless of their nationality. In cooperation with all countries around the world, including China, Japan will continue to make every effort to prevent the spread of infection and to converge the situation as soon as possible. In such a situation, allow me to express our distress at information that some people are being treated unjustly just because they are of East Asian origin, for example by being suspended from using facilities or by being calumniated. I would like to take this opportunity at the Human Rights Council to ask everyone to ensure that such actions do not occur.

Japan has been re-elected as a member of the Human Rights Council for another three years. The Government of Japan, in collaboration with the international community and civil society, is dedicated to leading international discussion to contribute to the protection and promotion of human rights.

Japan is going to host various important international events this year. During those events, we will highlight the importance of human rights in order to facilitate the protection and promotion of human rights throughout the world.

Japan places particular importance on women’s empowerment as well as protection and promotion of women’s rights. Japan will host the sixth World Assembly for Women, or WAW! this coming April. While last year High Commissioner Bachelet participated in the fifth WAW!, we will also have leading figures from a wide range of fields in the coming WAW!. The main theme of the next WAW! is based on “HeForShe”, which is the concept that men and women work together to develop a society

where gender equality is realized and all people can enjoy comfortable lives.
Japan has strongly committed to the rule of law and human rights protection based on it. This April, we will host the 14th United Nations Congress on Crime Prevention and Criminal Justice, otherwise known as “the Kyoto Congress”. Through the Kyoto Congress, we stress the importance of the promotion of the rule of law.

As a member of the Human Rights Council from the Asia-Pacific region, Japan stands ready to contribute to improvement of the human rights situation in this region. While this region has enjoyed remarkable economic growth, no one can deny the fact that democratization and protection of fundamental human rights are challenges that still need to be addressed. Fundamental human rights, including freedom of expression should be secured and suppression of human rights defenders should be prevented in every country. While each country has its own challenges for improvement of its human rights situation and the process and pace for improvement may differ from country to country, we believe that every country can share fundamental values and continue moving forward together in the same direction.

In this regard, we have attached importance to communication with other countries. For example, we have held a bilateral human rights dialogue with some countries, including Myanmar. With regard to the alleged human rights violations in Rakhine State, the Government of Myanmar announced its position to conduct an investigation into and prosecution of any criminal acts based on the final report of the Independent Commission of Enquiry (ICoE). Japan strongly expects the smooth progress of such steps and continuously supports Myanmar’s own initiatives.

The issue of abductions by North Korea is one of our top priority issues. We appreciate that “the resolution on the situation of human rights in DPRK” has been adopted at the General Assembly for the last 15 years consecutively. Japan, in close cooperation with other countries and the international community, continues to strongly urge North Korea to take concrete action towards the early resolution of the abductions issue.

I would like to introduce a couple of our latest initiatives to further protect human rights.
Japan has been vigorously taking action to protect and promote children’s rights. In this context, Japan is developing a national action plan to end violence against children. In addition, a highly qualified expert from Japan will stand as a candidate in the June election to the Committee on the Rights of the Child. We would appreciate your valuable support for her.

This April, Japan will open a national center called “Upopoy”, which, in the Ainu language, means “singing in a large group”. This center is expected to serve as a base to restore and promote the culture of the Ainu people, who are indigenous to the northern part of the Japanese archipelago.

The head of the Republic of Korea (ROK) delegation mentioned the issue of comfort women yesterday. Japan has been sincerely addressing this issue for a long period of time, including the agreement between Japan and the ROK in December 2015. And the projects based on the agreement have been received positively by many former comfort women.

Japan is committed to improving and enhancing the functions of the UN and the HRC. Given the limited amounts of human and financial resources and time available, we have to make the international human rights protection mechanism more effective and efficient. Through the opportunity provided by the review of the human rights treaty body to be held this year and the review of the HRC to be held next year, each country should proactively consider raising points to be improved towards enhancement of the international human rights protection mechanisms. Japan stands ready to contribute to such discussions, taking our own experience and advice from other countries into consideration.

This year marks the 75th anniversary of the UN Charter. I would like to take this opportunity to recall the Charter and decide to take further initiatives at home and abroad to protect and promote human rights based on the concept of “Human Security”.