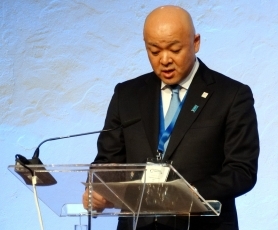 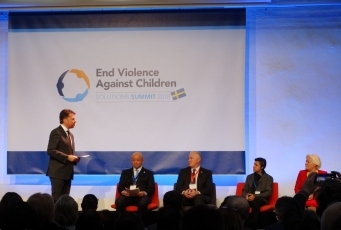 Your Majesty Queen Sylvia of the Kingdom of Sweden,
Your Excellency Mr. Stefan Löfven, Prime Minister of Sweden,
Distinguished Delegates,
Ladies and Gentlemen, Boys and Girls,

It is my great honor to deliver a speech at this conference of outstanding importance. It is also my pleasure to be here in Sweden, as the year 2018 marks the 150th anniversary of the establishment of diplomatic relations between Japan and Sweden.

As we are in the middle of the Winter Olympic season, I wish Swedish athletes every success at the PyeongChang Olympics. In fact, Mr. Tomas Gustafson, a famous Swedish speed skater, was my hero when I was a boy. Later, my dream came true when I became a three-time Olympian and achieved a bronze medal in speed skating. I firmly believe that we need to realize a world in which every child grows up with hopes and dreams, while being free from threats of violence. As a father of five children myself, I am ever more determined to make every effort to achieve such a goal.

Japan is making active efforts to end violence against children both domestically and internationally. The Government is currently working to comprehensively reform the way in which we develop human resources in Japan against the backdrop of a decreasing birth rate and aging population. In this context, there is an increasing awareness in Japanese society to protect and embrace children.

As for the area of child sexual exploitation, the Government of Japan formulated the "Basic Plan on Measures against Child Sexual Exploitation" last year. Our new policy called "Human Resources Development Revolution" puts emphasis on enabling all children to pursue their dreams, regardless of the financial situations of their families.

Japan's efforts to protect and promote the rights of the child go beyond the border. Japan is committed to the "WePROTECT Global Alliance" in close cooperation with the U.K. and other stakeholders. Japan has also engaged in "the Global Partnership to End Violence against Children."

Distinguished Guests, Ladies and Gentlemen, Taking this opportunity, I would like to announce the following three commitments:

First, I am pleased to declare that the Government of Japan will become a pathfinding country of the Global Partnership. As requested by civil society, we are planning to set up a multi-stakeholder platform in order to deepen discussions with representatives of civil society.

Second, I am happy to announce that the Government of Japan decided to provide support amounting to about 6 million U.S. dollars to "the Fund to End Violence Against Children." This contribution will be used to protect children facing threats from violence in Nigeria and Uganda.  Japan is proud to be the first country to contribute to the humanitarian window of the Fund. We also wish to join the Fund Steering Committee to follow up the Fund's activities.

In conclusion, Japan would like to affirm our commitment to contribute to building a better world in which every child grows up free from violence, and has hopes and dreams for the future. Thank you for your attention.