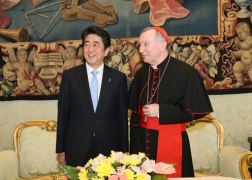 On Friday, June 6, commencing at 10:30 a.m. (local time) for approximately 30 minutes, Prime Minister Shinzo Abe had an audience with Pope Francis. An overview of the meeting is as follows.