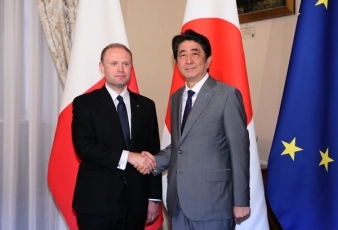 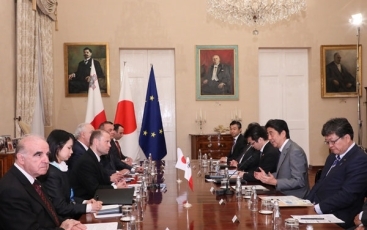 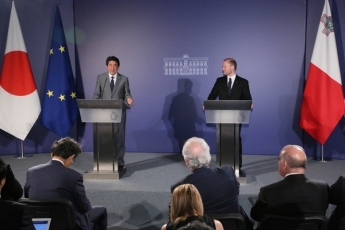 On May 27, commencing at around 7:50 p.m. for approximately 50 minutes, Mr. Shinzo Abe, Prime Minister of Japan, who is visiting Malta, held a summit meeting with H.E. Dr. Joseph Muscat, Prime Minister of Malta. The overview of the meeting is as follows.

(1) Prime Minister Muscat stated that even though Malta was a small country in Europe, it stood out for its high economic growth and low unemployment rate. He stated that he would like to collaborate with Japan in areas such as technology and services, with a view on the North-African markets. In addition, Prime Minister Muscat referred to the present visit of Prime Minister Abe as a good opportunity to further develop such bilateral relations.

(2) Prime Minister Abe expressed his respect for Prime Minster Muscat’s leadership and stated he hoped that his visit would lead to the advancement of bilateral relations.

(3) Prime Minister Abe stated that he had prayed for the souls of the war dead of the Japanese Imperial Navy and expressed his hope to collaborate on consolidating the rule of law at sea, to which Prime Minister Muscat showed his concurrence.

(4) In addition, Prime Minster Abe stated that he supported a strong EU and expressed his appreciation for Malta’s efforts as the presidency of the EU. He also referred to the UK’s exit from the EU (Brexit) and the Japan-EU Economic Partnership Agreement (EPA).

(5) Prime Minister Muscat also stated that he aimed to reach an agreement in principle on the Japan-EU EPA as early as possible.

(6) H.E. Mr. Louis Grech, Deputy Prime Minister and Minister for European Affairs, explained in concrete details the basic policy of the EU in its negotiations of Brexit and stated that the EU would secure the external transparency of the negotiations.

(1) The two leaders exchanged views about the situation in the East China Sea and South China Sea and shared the view that they would continue to work together closely to maintain the international order based on the rule of law.

(2) In addition, the two leaders shared the view that North Korea represented a new level of threat, and confirmed the importance of adopting a new United Nations Security Council resolution including strict measures against further provocative actions.