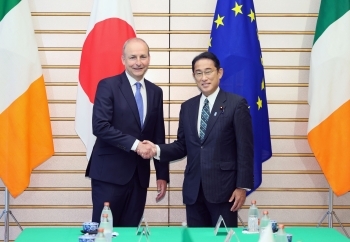 The two leaders who shake hands with each other (Photo: Cabinet Public Affairs Office) 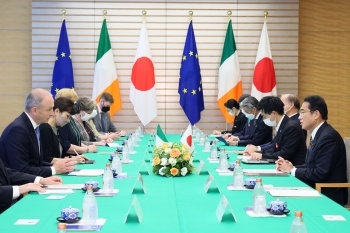 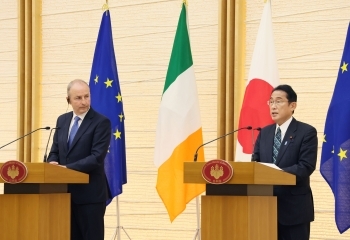 On July 20, commencing at 11:10 a.m. for approximately 50 minutes, Mr. KISHIDA Fumio, Prime Minister of Japan, held a summit meeting with H.E. Mr. Micheál Martin, T.D., Taoiseach (Prime Minister of Ireland), who is visiting Japan. The two leaders held a joint press conference followed by a working lunch from 0:15 p.m. for approximately 1 hour. The overview of the meeting and the working lunch is as follows.
The two leaders also issued a Japan-Ireland Leaders' Joint Statement.

Prime Minister Kishida stated that Russia's aggression against Ukraine is an outrage that undermines the foundation of the international order not only in Europe but also in Asia, that the security of Europe and the Indo-Pacific is inseparable, and that unilateral change of the status quo by force is absolutely unacceptable anywhere in the world. Prime Minister Kishida also explained Japan's unprecedentedly strong sanctions against Russia, among other things. Prime Minister Martin responded by highly appreciating efforts made by Prime Minister Kishida and Japan and explained Ireland’s efforts. The two leaders confirmed the importance of like-minded countries uniting to continue to impose sanctions against Russia and to provide assistance to Ukraine, as well as the need to closely communicate with vulnerable countries to provide assistance as the international community is facing food and energy supply shortages and price increases following the aggression.

Prime Minister Martin stated that on the occasion of his visit to Japan, he had visited the site of the planned construction of the "Ireland House" in Yotsuya, Tokyo, and Prime Minister Kishida welcomed the construction. The two leaders concurred on further developing the bilateral relations, including economic relations, such as those in the green and digital sectors, and to actively promote exchange of people between the two countries, on the basis of the Japan-Ireland Leaders' Joint Statement issued this time. Prime Minister Kishida also called for Ireland's cooperation in the early lifting of EU restrictions on imports of Japanese food products.

[Reference 2] Ireland House
Ireland House, on which the Irish government plans to spend the largest-ever budget for an overseas facility, will be built in Yotsuya, Tokyo (scheduled to be completed in 2024). The comprehensive facility will house the Embassy, offices of Irish government agencies and cultural facilities.