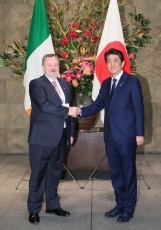 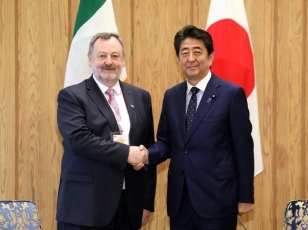 On October 24, commencing at 10:35 a.m. for approximately 20 minutes, Mr. Shinzo Abe, Prime Minister of Japan, received a courtesy call from Mr. Denis O’Donovan, Cathaoirleach of Seanad Éireann (Speaker of Upper House of Ireland). The overview of the courtesy call is as follows. The courtesy call was also attended by Mr. Eiichi Hasegawa, Special Advisor to the Prime Minister, Mr. Takaya Imai, Special Advisor to the Prime Minister and others from the Japanese side, and by H.E. Mr. Kavanagh, Ambassador Extraordinary and Plenipotentiary of Ireland to Japan, and others from Irish side.

Prime Minister Abe welcomed Mr. O’Donovan’s visit to Japan and stated, “Ireland is an important partner, sharing fundamental values.” In response, Mr. O’Donovan expressed his congratulations for His Majesty the Emperor’s enthronement and the opening of the Reiwa Era.

Prime Minister Abe stated, “I am pleased that Japan-Ireland relations have been favourable through frequent high-level visits, as well as through people-to-people exchanges at the private-sector level such as at the Rugby World Cup. Although it was regrettable that both Japan and Ireland lost in quarterfinals, exchanges between our two countries should be promoted through these types of opportunities at various levels.” In response, Mr. O’Donovan said, “Japan became a hero to the world in this Rugby World Cup, and it was proven that Japan’s organizational ability is world top class. If both teams had won in the quarter-finals, they might have played again.”

Mr. O’Donovan stated, “Prime Minister Abe’s visit to Dublin in 2013 has a significant importance to bilateral relations between Japan and Ireland. The Joint Declaration of the same year became a platform to strengthen bilateral relations. Currently, the Irish Government is preparing for the construction of a new “Ireland House” in Tokyo, which is the biggest overseas project for the Irish Government since its foundation, which makes evident the great importance that at Ireland has attached to Japan.” In response, Prime Minister Abe stated, “I hope that the construction of Ireland House as a flagship project will be successfully completed, and Japan would like to cooperate on this. In addition, trade and investment between our two countries will be boosted by the Japan-EU Economic Partnership Agreement.”

Both sides also exchanged views on the UK’s withdrawal from the European Union.