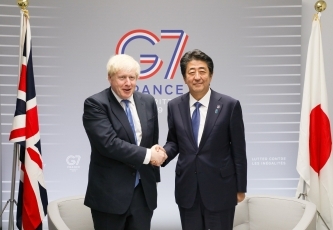 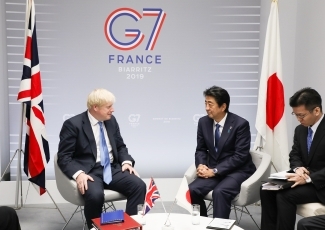 Japan-UK Summit Meeting
(Photo: Cabinet Public Relations Office)
On August 26, at 12:36 p.m. local time (7:36 p.m. Japan time), for about 30 minutes, Prime Minister Abe met with The Rt Hon Boris Johnson MP, Prime Minister of the United Kingdom of Great Britain and Northern Ireland, while attending the G7 Biarritz Summit in France. The overview of the meeting is as follows.

Both Prime Ministers welcomed substantial discussion among the G7 leaders and confirmed that Japan and the UK would continue close coordination at G7.

3. The UK’s withdrawal from the EU

(1) Both Prime Ministers reconfirmed their commitment to quickly establishing a future economic partnership after the UK’s withdrawal from the EU. Further, Prime Minister Abe welcomed the UK’s interest on a possible membership in TPP11 and expressed his intention to continue to support the UK’s efforts.

(2) Both Prime Ministers welcomed the development of cooperation in the fields of security and defense, such as port calls and joint training with Royal Navy warships in Japan and surveillance activities against illegal ship-to-ship transfers by North Korean flagged vessels. They also shared the view to coordinate on the planning for the postponed Japan-UK Foreign and Defense Ministers’ Meeting (2+2) to be held in Japan.

(2) Regarding North Korea, including the abductions issue, both Prime Ministers reconfirmed that their countries completely share the position. Further, they confirmed to continue close Japan-UK cooperation, including to counter North Korea’s illegal ship-to-ship transfers.