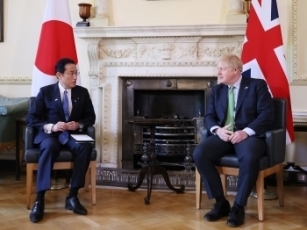 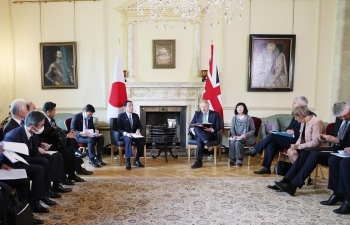 On May 5, commencing at 11:25 a.m. (local time; 7:25 p.m. JST), for the total of one hour and 45 minutes, Mr. KISHIDA Fumio, Prime Minister of Japan, who is visiting the United Kingdom, held a summit meeting including a 20-minute tête-à-tête, and working lunch with the Rt Hon Boris Johnson MP, Prime Minister of the United Kingdom of Great Britain and Northern Ireland. An overview is as follows.

At the outset, Prime Minister Kishida stated that he was pleased to meet Prime Minister Johnson again and congratulated the 70th anniversary of the reign of Her Majesty Queen Elizabeth II. The two leaders confirmed that the Japan-UK relationship is closer than ever before and that they would further deepen the bilateral cooperation; that the G7 would unite and lead the international community in response to Russia’s aggression against Ukraine, and would make efforts to sanction Russia and support Ukraine.