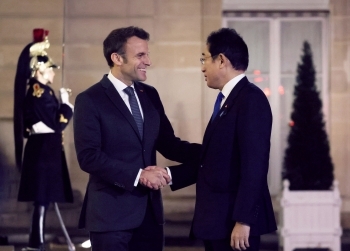 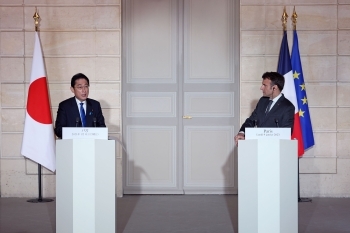 Prime Minister Kishida stated that he was visiting Paris for the first time as Prime Minister, that France is an exceptional partner in maintaining and strengthening the free and open international order based on the legal order, and that he would like to establish a new roadmap to show the way forward for both countries. In response, President Macron stated that he would like to create a new roadmap and further promote bilateral relations.
Prime Minister Kishida explained Japan's new National Security Strategy and stated that he hoped that Japan and France, as like-minded countries, would further strengthen their cooperation, and President Macron expressed his understanding. Prime Minister Kishida also stated that the security of Europe and the Indo-Pacific is inseparable and that he welcomed the progress in substantive cooperation, such as reciprocal visits of assets and joint exercises between Japan and France. President Macron referred to the review of strategies in France, and stated that he would like to deepen cooperation between the two countries. The two leaders concurred to hold the next Japan-France "2+2" meeting in the first half of this year, and they also exchanged views on Pacific island countries and confirmed that Japan-France cooperation would be further promoted based on the consular office of Japan in Nouméa in New Caledonia opened this month. The two leaders also welcomed the upcoming Japan-France Comprehensive Maritime Dialogue to be held in February.
The two leaders also exchanged views on space, cyber and maritime issues.
Prime Minister Kishida requested President Macron to lift import restrictions of Japanese food products by the EU.

Prime Minister Kishida explained that at the G7 Hiroshima Summit, he would call for the G7 to show its strong determination to firmly reject any attempt to unilaterally change the status quo by force as well as the threat and the use of nuclear weapons, and to uphold the free and open international order based on the rule of law, in particular to unite as the G7 against the aggression by Russia to continue and strengthen strict sanctions against Russia and strong support for Ukraine. He also explained that the G7 would actively address various issues of the international community, including energy and food security, and that since the summit will be held in Asia, issues regarding Indo-Pacific region would also be discussed thoroughly. The two leaders confirmed that they would work together toward the G7 meetings.

3. Cooperation in Regional and International Situations

The two leaders shared the view that the G7 should remain united in dealing with Russia's aggression against Ukraine and continue to impose strict sanctions against Russia and to provide strong support for Ukraine.
Both leaders expressed their opposition to attempts to unilaterally change the status quo by force in the East and South China Seas. They also stressed the importance of peace and stability in the Taiwan Strait. Regarding North Korea, the two leaders confirmed that they would closely work together to address the abductions issue as well as the issues concerning nuclear weapons and missiles.
Furthermore, the two leaders exchanged views on UN reform and concurred on the importance of strengthening the functions of the UN, including Security Council reform.