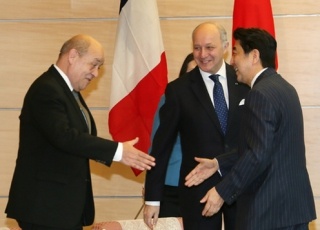 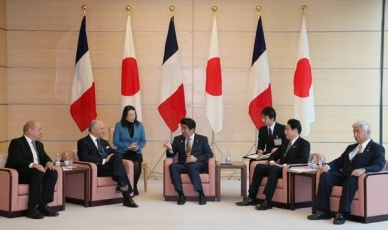 1. In his opening remarks, Prime Minster Abe expressed his pleasure to see the holding of the second Japan-France Joint Foreign and Defense Ministers’ Meeting in Tokyo following the meeting held in Paris last year, and that he hoped that through this meeting, Japan and France would advance concrete cooperation, including defense-equipment cooperation.

2. In response, Minister of Foreign Affairs Fabius stated that Japan was the only country in Asia with which France held a Joint Foreign and Defense Ministers’ Meeting and that he welcomed cooperation between the two countries in all fields, including security and defense. He stated that as both countries possessed advanced technologies, he particularly hoped that they would further advance cooperation on the theme of innovation.

Also, Minister of Defense Le Drian highly praised the cooperation being progressed between France and Japan in the fields of security and defense. Touching on cooperation in the field of maritime security in the Gulf of Aden and off the coast of Djibouti, he stated that he wanted to complement and strengthen cooperation between both countries.

Prime Minister Abe explained his intention to proceed with the development of security legislation. The participants confirmed that Japan and France which were confronted with terrorism shared the need to cooperation in the field of counter terrorism through assistance to moderate Muslim groups.

3. In addition, during the meeting they confirmed that Japan and France, which possess advanced technologies, would closely cooperate toward the success of the Third UN World Conference on Disaster Risk Reduction to be held in Sendai from 14th of March and the 21st Session of the Conference of the Parties to the United Nations Framework Convention on Climate Change (COP 21) to be held in Paris this year, and that France and Japan would continue to conduct exchanges of high-level government officials. Minister of Foreign Affairs Fabius, who will attend the Third UN World Conference on Disaster Risk Reduction, touched upon the damage caused by the Great East Japan Earthquake and stated that France would not forget the courage of the Japanese people and that it continued to offer its support for the reconstruction.