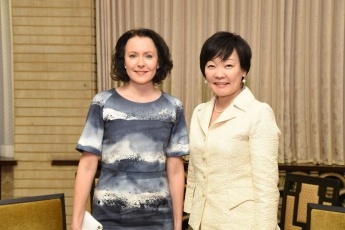 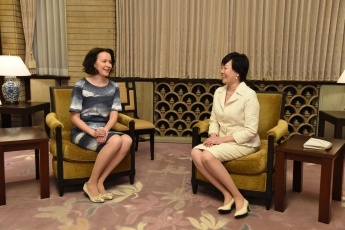 The meeting was held in a friendly atmosphere. Mrs. Abe expressed her welcome for Mrs. Haukio's visit to Japan and Mrs. Haukio responded that she had enjoyed staying in Kyoto and Tokyo very much.

Mrs. Haukio said that in Finland women are actively participating in the society and that Finland has a higher percentage of women among politicians and cabinet members than other countries, to which free public child-raising system greatly contributed. In response, Mrs. Abe introduced efforts by Japan to promote the women's participation in the society such as hosting the ''World Assembly for Women in Tokyo (WAW!)'', and explained challenges facing the Japanese society. She also said that Japan would like to learn the experiences of Finland.

They also exchanged views on their common interests such as agriculture and literature.