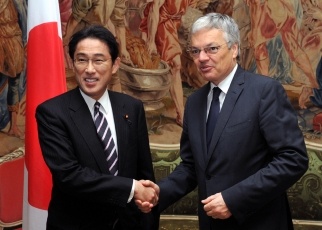 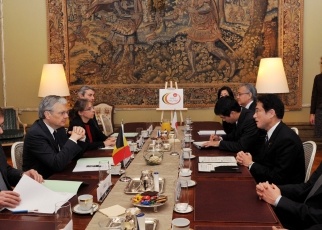 Today, on January 20, commencing at 8 a.m. (local time) for approximately one hour and 10 minutes, Mr. Fumio Kishida, Minister for Foreign Affairs, held a foreign ministers’ meeting with His Excellency Mr. Didier Reynders, Deputy Prime Minister and Minister of Foreign Affairs and European Affairs of Belgium. An overview of the meeting is as follows:

1 Bilateral relations
Minister Kishida congratulated Minister Reynders on his reappointment under the new administration led by Prime Minister Charles Michel. He also expressed his condolences over the demise of Her Majesty Queen Fabiola last December, and his gratitude for the careful consideration by the Belgian side for Her Majesty the Empress attending the state funeral.
Moreover, regarding the 150th anniversary of establishment of the diplomatic relationship between Japan and Belgium in 2016, the two ministers shared the view that they would extensively implement anniversary projects, and introduced the official logo of the 150th anniversary, which had just been finalized.

2 Cooperation in an international arena (fight against terrorism, UN Security Council reform, etc.)
Minister Kishida, taking into account the fact that this year marks the 70th anniversary of the end of the World War II, gave an explanation that based on the reflection on the past World War, Japan, as a peace-loving nation had made major contributions to the peace, stability and prosperity of the international society, and Japan’s orientation as a peace loving country would never sway in the future.
In response, Minister Reynders stated that while it is important to consider history, it is also necessary to tackle future tasks and mentioned the discussion on the fight against terrorism at the Foreign Affairs Council of the EU held the previous day. The two foreign ministers, in light of the recent terrorist incidents in France, shared the view that the two countries would cooperate in their fight against terrorism while collaborating with the international community.
Moreover, Minister Kishida gave an explanation on efforts such as the “proactive contribution to peace,” for which Belgium had already expressed its support, and touched on the necessity of the United Nations Security Council reform. The two foreign ministers shared the view that the two countries would cooperate with each other to realize the reform of the UN Security Council.

3 Economy
The two ministers shared the view that they would make arrangements for a trade and investment promotion seminar in Tokyo, and for reaching agreement in principle on the Japan-EU Economic Partnership Agreement (EPA) by the end of this year for the economic growth of the two countries. Additionally, in connection with the Great East Japan Earthquake, Minister Kishida requested cooperation for the relaxation or abolition of import restrictions on products from Fukushima Prefecture.

4 Cultural/human exchanges
The two ministers shared the view that they would implement projects commemorating the 150th anniversary of the establishment of the diplomatic relationship between Japan and Belgium to enhance cultural exchanges, while simultaneously accelerating their efforts for an early introduction of working holidays to aim at promoting human exchanges.