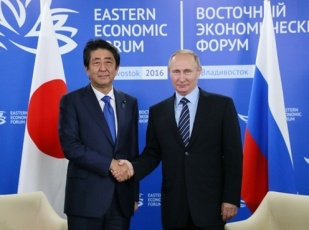 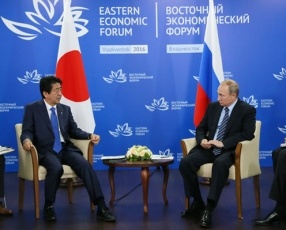 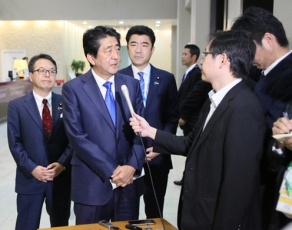 Photo: Cabinet Public Relations Office
On September 2, Mr. Shinzo Abe, Prime Minister of Japan, who was visiting Vladivostok, the Russian Federation, held a Japan-Russia Summit Meeting with Mr. Vladimir Vladimirovich Putin, President of the Russian Federation, for approximately three hours and 10 minutes. The meeting took the form of a Summit Meeting commencing at 6:20 p.m. local time for approximately two hours and 5 minutes (including 55 minutes session between the two leaders just with interpreters), followed by a working dinner lasting approximately one hour and 5 minutes.

2 Issue of concluding a peace treaty

With regard to the issue of concluding a peace treaty, Prime Minister Abe stated that he hoped the two leaders would firmly follow up the outcome of the meeting in Sochi. Subsequently, in a serious yet congenial atmosphere, the two leaders spent time holding a discussion that to shed light on a path for making concrete progress in the negotiations based on a new approach.

Prime Minister Abe explained that the fishing industry was a traditional field of cooperation that had provided Japan and Russia with profits from their bountiful seas, and that he was personally placing an emphasis on it. Prime Minister Abe stated that he hoped that attention would be paid to ensure the industry could continue sustainable operation under the existing frameworks.
In response, President Putin stated that the ban on drift nets was not a measure directed at Japan, it was made in the interests of environmental conservation, and that he intended to cooperate so that Japanese fishermen could operate in other fields in Russian waters.

Prime Minister Abe explained that the submarine-launched ballistic missile (SLBM) fired by North Korea in August represented a new, qualitatively different threat to those seen thus far. Prime Minister Abe said North Korea's provocative acts were a clear violation of the relevant United Nations Security Council (UNSC) resolutions, and that the UNSC needed to implement severe measures. Prime Minister Abe also emphasized that there was no change to Japan's determination to make every effort to promptly resolve the abductions issue, and stated that he hoped to continue cooperating with Russia on resolving outstanding issues of concern.
In response, President Putin explained that attempts by North Korea to legitimize the nuclear problem were unacceptable, and stated that it would be important to resumption of the Six-Party Talks to resolve the problem.
Additionally, Prime Minister Abe pointed out that having a meeting for the sake of a meeting is meaningless, and discussions that produce concrete results must take place.

Prime Minister Abe voiced strong concerns about the deteriorating humanitarian situation in Aleppo and elsewhere and expressed his hope that political process would be progressed through cease of hostile activities by the initiative of United States and Russia, and through   improvement of the humanitarian situation. Prime Minister Abe also expressed his expectations over Russia's role in further improving humanitarian access and stated that Japan would also continue to support Syria and its neighbors in the field of  the humanitarian and reconstruction.

Prime Minister Abe expressed his concern about the recent increase in tensions between Russia and Ukraine, explained that Japan appreciated the role of the Normandy Format for achieving stability in Ukraine, and emphasized the need  to continue efforts to implement the Minsk Agreements by all sides.