Top > Countries & Regions > Europe > Mrs. Akie Abe, the Spouse of the Prime Minister of Japan, visits the Russian Federation and the United Kingdom

Mrs. Akie Abe, the Spouse of the Prime Minister of Japan, visits the Russian Federation and the United Kingdom

From April 27 to 29 2017, Mrs. Akie Abe, the spouse of Mr. Shinzo Abe, Prime Minister of Japan, accompanied the Prime Minister on a visit to Russian Federation (Moscow) and the United Kingdom (London) and attended various activities. 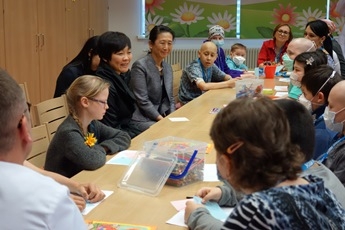 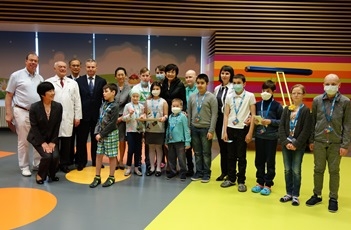 Mrs. Akie Abe, the spouse of Prime Minister of Japan, visited Dmitry Rogachev National Research Center of Pediatric Hematology, Oncology and Immunology.
First, Mrs. Abe had a meeting with Mr. A.G. Rumyantsev, MD, PhD, General director of the center, Mr. Kagramanyan, First Vice-Minister of Health of Russian Federation, and others, who explained to her about the practice and contribution of the center to pediatric treatment.
Then, Mrs. Abe spent time with children who are hospitalized in the center and undergoing treatment. They made paper cranes together from the folding papers which Mrs. Abe had brought from Japan, and Mrs. Abe exchanged words with each of the little patients. The center has a school and accommodation facilities which provide possibility for parents to live together with their children who are of various age and from all over Russia, while receiving treatment in the center.
In addition, Mrs. Abe watched various facilities in the center with Mr. Rumyantsev, the General director of center, and doctors. The center is cooperating with the National Center for Child Health and Development (Japan) as part of the eight-point cooperation plan being promoted between Japan and Russia. Mrs. Abe inspected the office of Promotion of Japan - Russia Medical Collaboration located in the center where the experts at both centers showed how actually they conduct diagnosis remotely using image communication.
Mr. Rumyantsev, General director of the center, expressed his will to cooperate widely with Japan including in the field of radiotherapy for pediatric cancer and stated that he would like to contribute not only to Japan and Russia but also to pediatric medicine in the world. He also expressed his expectation to further cooperation in the future.

(Dmitry Rogachev National Research Center of Pediatric Hematology, Oncology and Immunology)
(1) Founded in 2011, as a comprehensive medical facility with medical research, surgery, treatment, rehabilitation, etc. related to pediatric hematology, oncology and immunology. It is a national institution affiliated with the Ministry of Health of Russian Federation, and Russian citizens can receive medical services for free. Parents can also live together in the rehabilitation building, and a small school is also available.
(2) The reason for the development of the center, as it is told, was the fact that a boy (then 10 years old), who had been treated for leukemia at the Pediatric Hematology Research Center, sent a letter to President Putin in 2005, in which he wrote “I want to eat bliny (Russian-style crepe) with the President". President Putin later visited the center and met with the boy whose surname was Rogachev. Then it was decided to establish a pediatric hematology, oncology and immunology center. After that, President Putin visited the center several times.
(3) Medical cooperation between the Rogachev Center and the National Center for Child Health and Development in Japan is proceeding as a part of the eight-point cooperation plan. 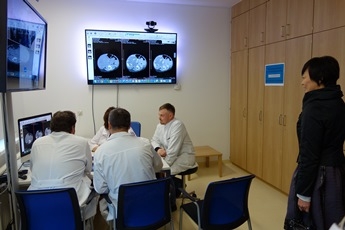 Mrs. Abe met with Russian and Japanese women playing active part in various fields in Moscow such as culture, art, human exchange, tourism, etc.
Mrs. Abe listened to various experiences of attendees who have activity in Russia using their own expertise and knowledge of Japanese culture, differences in cultures between Japan and Russia, and thoughts on relations between Japan and Russia. She exchanged views on the attractiveness of both countries that they came to know through people-to-people exchange and expressed her wish for their continued success.

1. Meeting with the people who are promoting Japanese food and Sake (Friday 28 April) 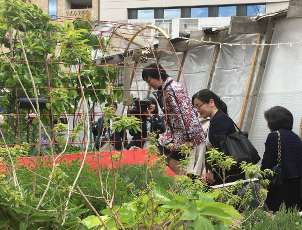 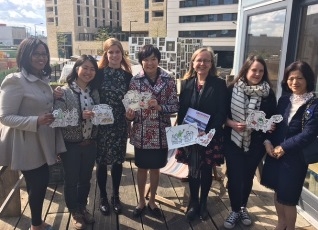 Mrs. Abe visited the “Skip Garden”, a farm run by Sustain, an NGO group, which supports the food supply and the development of agriculture, forestry and fisheries considering environment and resource protection. Mrs. Abe received a briefing from the Chief Executive of Sustain, and observed “Skip Garden” which used an open space in urban area. She also learned about the efforts to provide the agricultural products harvested from their fields to the local community. The participants explained that the activity was started in a small space 13 years ago, mainly by women, but now there were more than 2000 fields in London and its suburb, and that the activities were expanded to the comprehensive efforts including food safety, food education to children and fair trade. Mrs. Abe introduced her own activity about foods and exchanged opinions with the participants. She appreciated their efforts for using an open space for local production and local consumption.

( Sustain)
Sustain is an NGO which supports the food supply and the development of agriculture, forestry and fisheries considering environment and resource protection. The organization runs various projects such as working with London City to rate each council’s efforts on food. At the Skip Garden, they run fields using open spaces in urban area and support activities to provide food to local communities.

Mrs. Abe visited an NPO, Business Disability Forum, which provides full support for the employment of disabled people. Mrs. Abe ardently listened to the explanation by the participants, sometimes asking questions, on such topics as their efforts including making standards to promote employment of disabled people, and the impact of the London Olympic and Paralympic Games on the employment of the disabled in the UK. Mrs. Abe pointed out the importance of creating a working environment friendly to disabled people and the education fit to individuals. They agreed that top managements of companies and organizations need to change their awareness. 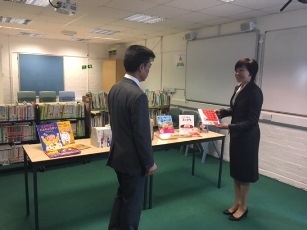 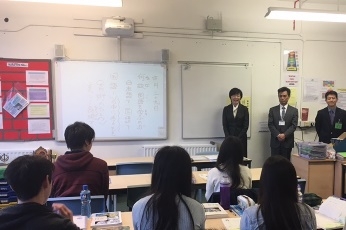 Mrs. Abe visited a Japanese Supplementary School in Brent, London. The school aims at facilitating the students’ adaptation to the school life after returning to Japan by providing education on Japanese language based on the curriculum guideline to those living in the UK including the students going to British or international schools. The school plays a precious role in providing a place to experience Japanese school life for the children who go to British and international schools.
After being welcomed by school staff headed by Principal Aoki, Mrs. Abe donated various Japanese books as “Akie Bunko” for helping students’ studying Japanese language.
Following this, Mrs. Abe observed classes of the first grade of elementary school and the third grade of junior high school. To the former, she said, “I hope you will make a lot of friends, and study both English and Japanese well”, and to the latter, she said, “I hope you will understand the advantages of both Japan and the UK, and will be a bridge over the two countries.” She also shook hands with each student and had time to communicate with them.

Mrs. Abe exchanged opinions with former JET programme participants who are living in the UK. The participants introduced how they became interested in Japan and their memories in Japan. They mentioned that the programme had had a great influence on their life and Japan became a second home country for them.
The participants also discussed various topics including promoting women’s participation in the workforce, and Mrs. Abe introduced the recent change of environment in Japan surrounding women. They discussed how to achieve a society where women can fulfill their potentials.

(JET Programme)
The JET Programme is short for the “Japan Exchange and Teaching Programme” and is run by local governments under the cooperation of the Ministry of Internal Affairs and Communications, the Ministry of Foreign Affairs, the Ministry of Education, Culture, Sports, Science and Technology and the Council for Local Authorities for International Relations (CLAIR) . It had the 30th anniversary in 2016, and more than 62,000 people from 65 countries have participated since the programme started.
Page Top
Back to Europe