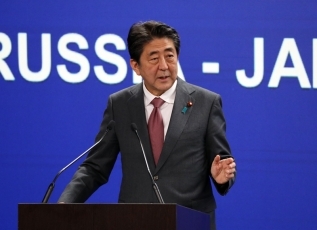 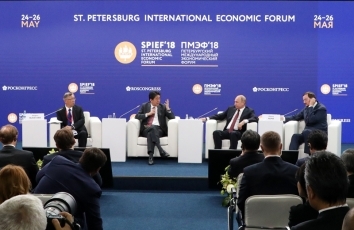 I am pleased to address you as we open the Japan-Russia Business Dialogue.

When Peter the Great founded St. Petersburg, he envisioned it as Russia’s window to the world. It is truly a great pleasure to be able to come together in this way with business leaders from Russia and Japan here in this place that has indeed become an international city just as Peter the Great envisaged.

Japan-Russia relations hold enormous potential. In order to transform that potential into reality, I proposed an eight-point cooperation plan to President Putin precisely two years ago. Russia is blessed by an abundance of natural resources, a market of more than 100 million people, and a highly talented workforce. Cooperation combining that with Japan’s knowledge and technologies is now poised to put forth buds and come into bloom. There are already more than 130 projects based on this cooperation plan, with half of them now beginning to shift into reality, taking shape in the form of contracts and so on.

President Putin has announced strategic objectives through to 2024. The shape of the future that Russia is aiming for six years from now is one with longer healthy life expectancies, improved living environments, more highly-productive export-oriented industries being created, and the digital economy becoming increasingly widespread.

Many of these objectives emphasizing such improvements in day-to-day living are in complete alignment with the contents of the cooperation plan we have been advancing. We are committed to this cooperation plan and intend to continue to press forward with cooperation that makes use of technologies and knowledge that only Japan can provide in such a way.

In the field of medical treatment and healthcare, a rehabilitation center opened in early May in Vladivostok. Cooperation among specialists has also progressed in the areas of childhood cancer, endoscopy, health promotion, and preventive medicine. In addition, we look forward to future potential in the area of medical supplies, where cooperation has already begun in concrete terms.

As for the urban environment, a pilot project was launched in Voronezh by which automobile traffic has been reduced by 30 percent on roadways on which Japan’s “smart” traffic signals have been installed. Efforts to improve urban rail transport are also underway. We also engaged in cooperation in the drafting of a development concept for Vladivostok.

In the field of energy as well, in which our countries have historically enjoyed cooperation, in addition to our project in Sakhalin, Japanese corporations are contributing to Yamal LNG by constructing a plant and by providing financing.

We also have high expectations for a project to construct an LNG transshipment terminal in Kamchatka, which will enable an expansion of LNG exports to the Asia-Pacific region.

In the area of enhancing productivity, a productivity diagnosis of Russian companies was conducted, along with studies of the efficiency of Russian business people. These have resulted in reductions in the number of hours operated at Russia’s manufacturing sites and lower defect rates.

Toyota Motor Corporation and Nissan Motor Corporation, both of which are engaged in local production here, have been actively working to make Japanese companies’ technologies and know-how permeate Russian companies. Both companies have firmly set down roots in the Russian marketplace despite facing the extremely challenging reality of a shrinking Russian automobile market caused by a recession soon after their plant operations began.

In addition to these two corporations, a large number of Japanese firms have invested in Russia’s manufacturing industry, contributing to the promotion of exports and an expansion in employment.

One of the hallmarks of Japanese companies is that they work united with local areas to realize projects while also contributing to strengthening the industrial base of the countries to which they are exporting. If Japanese and Russian companies join hands, projects that greatly benefit people’s daily lives in both countries will surely come into being. And, I am firmly convinced that this will bring about a bright future for both our countries.

I very much look forward to this Business Dialogue being a meaningful venue that helps to make such a future possible. Thank you for your kind attention.