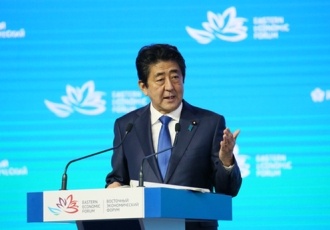 (Photo: Cabinet Public Relations Office)
Mr. Kevin Rudd, thank you for your kind introduction. President Park Geun-hye, it is an honour to see you again. And most of all, President Vladimir Putin, I am truly delighted at this, my first opportunity to set foot in Vladivostok, in response to your gracious invitation.

This time, of course I came here by airplane.

But this city has a port as its doorway, and it is often said that Vladivostok is even more stunning when seen from the sea. So, really, this is perhaps a city we should come visit by ship.

About a century ago, a visitor struck breathless at the scenery greeting him in the harbour penned the line, “One can scarcely conceive a more beautiful situation.” The writer was none other than the world-famous polar explorer Fridtjof Nansen.

There are some places I would really like to visit in this city.

I understand that if you head to Aleutskaya Street, you will find the house that was the birthplace of Yul Brynner, who won an Oscar for his starring role in “The King and I,” along with a statue memorializing him. I simply can’t miss out on a visit there.

And I have heard that Vasiliy Ochepkov, who, as President Putin knows very well, introduced Kodokan judo to Russia, instituted the first dojo at Korabelnaya Street No. 21. I wonder if that building is also still with us today. I am saving all these sights for when I come again someday.

And I hope to make that “someday” a day in the not too distant future. Let me explain why later on in my remarks.

Every year in your annual address to the Federal Assembly, President Putin, you highlight the development of Russia’s Far East region as the most important factor for national development. By making Vladivostok a “free port” and setting it forth as a model, you hope to make other port cities into “free ports” as well.

I imagine you wish to restore the prestige Vladivostok enjoyed at one time as a truly international city.

That dream that President Putin holds is my dream as well. Mr. President, you are looking to make Vladivostok a gateway linking Eurasia and the Pacific, am I correct?

The Pacific Ocean is now poised to evolve into a free, fair, and open economic zone. The vast Eurasian land area lying beyond this city will provide further impetus to its dynamism. I am firmly convinced that the sparkle of Vladivostok will light up even the farthest reaches of the Pacific Ocean and give rise to enormous synergistic effects.

President Putin, when we met not long ago in Sochi, I presented you with an eight-bullet-point proposal in which I had narrowed down a list of fields where Japan can cooperate with Russia.

One of these was “creating cities that are clean and comfortable and easy to live and work in.” Am I right in saying there is no other city so suited as Vladivostok to serve as a model city for our two countries to carry this out?

Please do add Japan in to this task of cultivating Vladivostok to be a city convenient for its residents and brimming with appeal for its tourists, mixing modern motifs into the nostalgia-inducing pre-revolution architecture and the characteristic Soviet-era designs while taking full advantage of the unique beauty of the sea and the hills. I make this proposal in all earnestness. Let us make this a reality together, shall we not?

While preparing for this trip, I had the opportunity to look at Russia’s demographic statistics, and I couldn't help but be surprised.

As a rare occurrence even globally, Russia has been achieving a steady rise in its average life expectancy as well as increases in its population. With an increasing number of school-age children and an insufficient number of schools as a result, the reality which has emerged is enviable from the Japanese standpoint.

However, the working-age population will decrease remarkably in the years to come, and there will be a shift in the burden, concentrated on the people who are now in that 10-to-19 age bracket.

Just as they are entering the prime of life, the burden of medical care costs for the elderly will weigh heavily upon them. Taking notice of that, we put forth our proposal of “lengthening the healthy life expectancy of the Russian public by preparing state-of-the-art facilities for health and medical care” as the first of the eight items.

The issues Japan faces are similar indeed. In Japan, where we face an increasingly aging society alongside a falling birth-rate, a burden will fall upon the medical care and the pension system. We must hammer out wide-ranging policies and measures so that the members of our greying generation maintain their health. Therefore the concerns President Putin harbours about demographics are the very same concerns that I myself have.

President Putin, I imagine you are encouraging Russia’s teenagers to work hard going forward without flinching, because there are so many people in the older generation. The necessary encouragement for Japan’s youth is in fact one and the same.

However, there is no quick-acting remedy for this issue. What political leaders can do is to think of the destiny of the nation always over a long scale of 20 or 30 years. Once we have bravely faced the issues and hammered out creative policies, it is simply a matter of working tirelessly to bring them into execution without fail.

In saying this, I imagine that President Park will also nod her head in agreement. What should we do in order to have the young generation think that although the future may not become better immediately, we can certainly do better if only we work hard? I believe we have this as a challenge and also a worry we all share in common.

Ladies and gentlemen, there are only three means for bringing about economic growth. These are the renewal of capital stock, an increase in labour input, and gains in labour productivity. My economic policies known as “Abenomics” are now aiming to boost Japan’s growth by actively working on all three of these elements.

However, economists all agree in saying that what is more important than anything else for growth is the expectations of the public.

The basis for everything is people believing that tomorrow will be better than today.

For this reason, President Putin, first of all let you and me share in a strong conviction regarding the otential of the future that the closer cooperation between Japan and Russia will bring about.

The economies of Russia and Japan are not in rivalry. I am fully confident that ours is a relationship in which each complements the other in a magnificent way.

Let us envision a future in which we both grow, each providing stimulation to the other in both demand and supply aspects. And let us do everything necessary so that the people in both our countries entrust their bright futures to such a relationship.

For example, cooperation between small- and medium-sized enterprises is extremely promising. The development of energy resources and the expansion of their production capacity will be a prime example of creating a win-win situation.

Let us make the Far East Russia region a base for exports to Asia and the Pacific region while raising productivity by moving forward with the diversification of Russian industries and then taking full advantage of that. Shall we not move forward together in generating momentum for cooperation in advanced technologies and people-to-people exchanges -- in other words, in investing towards the future?

Given that, President Putin, I will present to you a new proposal. Let us meet once a year in Vladivostok to confirm with each other the state of progress of these eight points.

Let us occasionally enter the virgin taiga forest, get enveloped in the sunlight filtering through the trees that appeared in Akira Kurosawa’s Dersu Uzala, and together consider what kind of relations Japan and Russia must have 20 or 30 years into the future.

This is a proposal that every year we have an opportunity to move away from our daily obligations to have relaxed discussions about what we should do now to bring that about. Ladies and gentlemen in the audience, as you applause, thank you very much, I think it has been endorsed.

Most importantly, by doing so I will be able to come to Vladivostok every year.

To the Russian executives here in the audience, let me tell you that Japanese pile drivers were used in constructing the bridge you crossed to be here today. And it is Japanese-made gas turbines producing the electricity used in this hall.

I hope that all of you accumulate many experiences working together with Japanese companies at the earliest possible time.

It is no exaggeration to say that invariably, the manufacturing worksites of Japanese companies are staffed by workers putting their heart and soul into improving the efficiency of the production line. Calls to improve the system from the bottom reach the managers and designers.

This is how “kaizen,” which uses the wisdom of the workplace to reduce the number of defective goods while increasing safety and efficiency step by step, came to take root. It is a kind of ingenuity first developed at Japan’s worksites, which are not authoritarian but egalitarian.

In addition, in competitive markets, prices are determined by the markets themselves, not freely decided by the companies. In such circumstances, without sacrificing product quality, what should be done amidst competition, in order to ensure a profit and emerge a winner?

It is Japanese companies that, truly grounded in the technique of “kaizen,” found a solution of lowering costs and ensuring gross margins and shaved waste off of production.

Please don’t ask what is so special about that. Until Japanese companies showed the way, manufacturing things that were “both cheap and well-made” was thoroughly believed to be impossible. Professor Michael Porter of Harvard Business School has pointed that out.

Despite a large number of countries mastering this technique early on, that surge has still not arrived in Russia. Russia has not yet experienced the innovation in production ideology that arises through interacting intensely with Japanese companies.

President Putin, the road to becoming the manufacturing power you are aiming at has a proven shortcut. And that is partnering with Japanese companies, I can proclaim emphatically.

Vladimir, one big, big issue awaits you and me down the road.

I cannot help but say that it is an unnatural state of affairs that the important neighbors of Russia and Japan, which surely have unlimited potential, have to this day not yet concluded a peace treaty.

Yet if we continue on like this, this very same discussion will continue for yet more decades to come. By leaving the situation as it is, neither you nor I will be able to leave better possibilities to future generations.

Vladimir, shall our generation not be the one to have the courage to fulfil our responsibilities? Shall our two countries, Japan and Russia, not overcome all manner of difficulties to leave to the young people of the next generation a world that makes those possibilities come into full bloom?

Putting an end to the unnatural state of affairs that has continued these 70 years, shall we not together carve out a new era for Japan and Russia going forward?

Vladimir, in order to carve out towards the future bilateral relations overflowing with unlimited potential, I am resolved to putting forth all my strength o advance the relationship between Japan and Russia, together with you.

Thank you very much.
END