Signing of the New Tax Convention between Japan and Spain 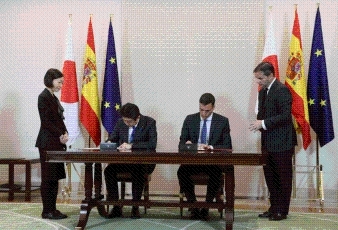 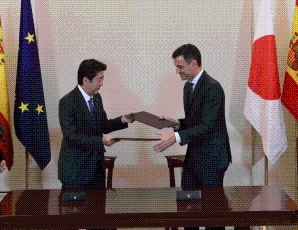 1. On October 17, 2018, “Convention between Japan and the Kingdom of Spain for the Elimination of Double Taxation with respect to Taxes on Income and the Prevention of Tax Evasion and Avoidance”” (hereinafter referred to as the New Convention) (English (PDF)

) was signed in Madrid by Mr. Sinzo Abe, Prime Minister of Japan and H.E. Mr. Pedro Sánchez Pérez-Castejón, President of the Government of Spain.

2. The New Convention wholly amends the existing Convention, which entered into force in 1974, by revising the taxation on business profits, expanding the extent of reduction of taxation on investment income, introducing measures for prevention of abuse of the New Convention, arbitration proceedings in mutual agreement procedures and assistance in the collection of tax claims, and reinforcing the exchange of information concerning tax matters. It is expected that, while eliminating double taxation and preventing international tax evasion and tax avoidance, the New Convention promotes further mutual investments and economic exchanges between the two countries.

3. The following are the key points of the New Convention.

(2) Taxation on Investment Income
Taxation on investment income (dividends, interest and royalties) in the source country will be subjected to the reduced maximum rates or exempted as follows:

(3) Prevention of Abuse of the New Convention
In order to prevent abuse of benefits under the New Convention, it is provided that only residents who satisfy specified conditions, such as qualified persons, may be entitled to the exemption from tax on investment income. In addition, any benefit under this Convention will not be granted if it is reasonable to conclude that obtaining such a benefit was one of the principal purposes of any transaction, or if the income is attributable to a permanent establishment in a third country and does not satisfy specified conditions.

4. After the completion of the necessary domestic procedures in each of the two countries (in the case of Japan, approval by the Diet is necessary), each of the two countries shall send through diplomatic channels to the other country the notification confirming the completion of its internal procedures. The New Convention will enter into force on the first day of the third month following the month of receipt of the latter notification and will have effect:

(a) with respect to taxes levied on the basis of a taxable year, for taxes for any taxable years beginning on or after January 1 in the calendar year next following that in which the New Convention enters into force; and

(b) with respect to taxes levied not on the basis of a taxable year, for taxes levied on or after January 1 in the calendar year next following that in which the New Convention enters into force.

(c) The provisions concerning the exchange of information and the assistance in the collection of taxes have effect from the date of entry into force of the New Convention without regard to the date on which the taxes are levied or the taxable year to which the taxes relate.

Page Top
Back to Japan-Spain Relations