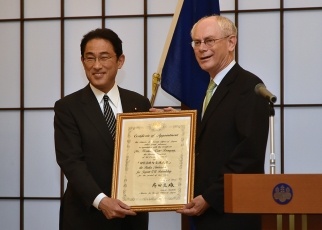 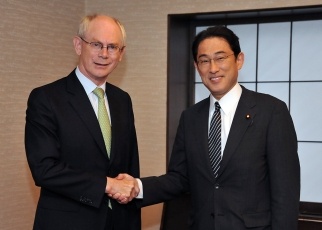 1. On Wednesday, 2nd June, Foreign Minister Fumio Kishida appointed the title of the “Haiku Ambassador for Japan-EU Friendship” to. Mr. Herman Van Rompuy, the former President of the European Council (for the duration of 2 years).

2. The former President Van Rompuy, as a haiku lover, has been contributing to the promotion of understanding on Japanese culture through haiku and thereby strengthening of Japan-Europe relationship through haiku. Building upon his achievements, the appointment is aimed to receive his further cooperation in this area.

3. At the ceremony hosted by Foreign Minister Kishida on the occasion of the appointment, Foreign Minister Kishida presented haiku “Nichiou no shinkou hiromu kunpu ya (Japan-Europe friendship, ever boundlessly growing, in the fresh summer breeze”, and Mr. Van Rompuy presented two haiku--- “On the green mountains, the woods in light and shadow, Fertile Haiku ground”, and “All over the world, Poets sing life and nature, Sharing makes peace”.