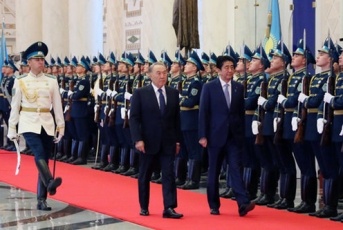 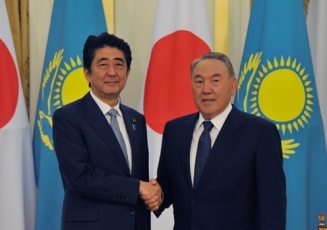 1. Itinerary of the Visit

(1) Summit meeting with H.E. Mr. Mr. Nursultan Nazarbayev, President of the Republic of Kazakhstan (Announcement of a Japan-Kazakhstan Joint Statement following the meeting) 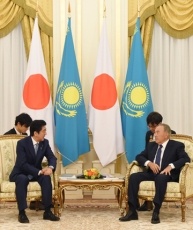 Photo: Cabinet Public Relations Office
On October 27, commencing at 11:10 a.m. local time until 12:50 p.m. for approximately 1 hour and 40 minutes, Mr. Shinzo Abe, Prime Minister of Japan, held a summit meeting with H.E. Mr. Nursultan Nazarbayev, President of the Republic of Kazakhstan. The initial meeting comprised a small group of relevant persons, and ran for over 1 hour.

President Nazarbayev first expressed his appreciation for Prime Minister Abe’s visit to Kazakhstan, and stated that regarding the abolition of nuclear weapons, which is a common theme for both countries, Kazakhstan has taken initiatives in the United Nations for nuclear disarmament and non-proliferation, and is also supporting and cooperating with Japan‘s activities in this area. President Nazarbayev then commented on how the people of Japan and Kazakhstan are quite similar, also noting the theory of how they both share the same roots. President Nazarbayev highlighted that Kazakhstan’s capital city of Astana was built on the master plan of the leading Japanese architect Kisyo Kurokawa, as well as that Shigeo Katsu is the President of Nazarbayev University. Furthermore, President Nazarbayev confirmed the importance of Prime Minister Abe’s visit to Central Asia and the significance of the “Central Asia plus Japan” Dialogue, and recognized that this visit will serve as a powerful impetus to bilateral relations between the two countries.

Prime Minister Abe stated that this was the first visit in nine years by a Japanese Prime Minister to Kazakhstan, and the fourth summit meeting held including on the occasions of multilateral meetings, and also expressed his delight at the development of bilateral relations under the close and friendly relations between both leaders. Prime Minister Abe also conveyed that he is pleased to see that Japanese people are active in Kazakhstan, and indicated his expectations at achieving specific outcomes from this visit, which also has an accompanying economic mission. Furthermore, Prime Minister Abe stated that he is extremely pleased that Japan and Kazakhstan are on the same path toward nuclear disarmament and non-proliferation, and expressed his hope that this visit will serve to further strengthen bilateral relations between the two countries. Prime Minister Abe also commented on the decision on the reciprocal exemption of diplomatic visas, and expressed intent for the early signing of a memorandum on future defense exchanges and the facilitation of security dialogue.

President Nazarbayev reported that it is planned for the six joint projects worth over 700 million dollars to progress, while also noting the importance of Toyota’s expansion into Kazakhstan and conveying his expectations for other Japanese corporations to follow suit. President Nazarbayev stated that although Kazakhstan is rich in natural resources, it is also imperative that the country builds an economy that is not solely dependent on these resources; therefore, he is hoping to work with Japan in the area of technical expertise. President Nazarbayev also noted that vast amounts of land in Kazakhstan could be used for agriculture, and the country needs to address the issue of processing agricultural produce and raising productivity. Moreover, President Nazarbayev stated that projects for building roads and railways are essential considering Kazakhstan’s expansive land, and indicated his anticipation for Japanese companies to assist in regard to this. President Nazarbayev also expressed his hope that the business forum scheduled for later in the day will enable business men from both countries to find common projects to work on. President Nazarbayev then reported that the next World Specialized Exposition will be held in Astana in 2017 on the theme of “Future Energy”, and conveyed his expectations for Japan to showcase its latest technology for realizing a hydrogen-powered society at the World Expo 2017.

In response, Prime Minister Abe thanked President Nazarbayev for the visa exemption granted to Japanese nationals, and confirmed his cooperation in boosting investment between the two countries by leveraging the accompanying economic mission, among other initiatives.

(Representatives from Japanese corporations were introduced during the course of the meeting.)

Prime Minister Abe commented on Japan’s cooperation in this field in human resource development and other areas, and stated his intention to continue providing Kazakhstan with Japan’s technical expertise in nuclear power.

In response, President Nazarbayev confirmed that Kazakhstan is proceeding with its plan for building nuclear power plants, and commented on how he was also able to inspect some of Japan’s nuclear reactors when he visited the country, highlighting Japan’s extensive experience and track record in terms of safety and conveying his very keen interest in Japanese nuclear technology. President Nazarbayev also stressed the importance of cooperation between the two countries in the excavation and fuel processing of uranium.

(i) In regard to the situation in the Ukraine, President Nazarbayev iterated that Kazakhstan will also cooperate to improve relations between Russia and Ukraine, stated that it is imperative that the Minsk Agreement is upheld, and expressed his expectations for Japan to also play a part in improving the situation. In response, Prime Minister Abe stated that Japan will proactively contribute to resolving the situation in Ukraine.

(ii) In regard to North Korea, Prime Minister Abe stated that the country is blatantly violating the United Nations (UN) Security Council Resolution by continuing to develop nuclear weapons and missiles, and strongly urged the international community to work together in calling on North Korea to restrain its provocative actions and strictly observe the UN Security Council Resolution. Prime Minister Abe also indicated that the North Korea abduction issue is a high priority for Japan, and expressed his hope for the understanding and cooperation of Kazakhstan in working toward an early resolution.

III Cooperation in the global arena 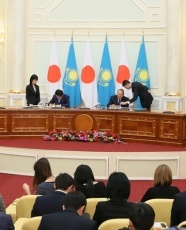 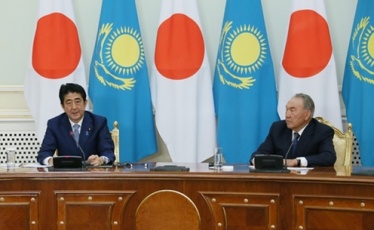 Prime Minister Abe indicated that Japan will make further contributions to the peace and stability of the international community, from the position of “Proactive Contribution to Peace” and also based on the recently enacted “Legislation for Peace and Security”. Prime Minister Abe called for support of Japan’s efforts in this area.

President Nazarbayev iterated that as countries which have both suffered damage from nuclear weapons, it is imperative that Japan and Kazakhstan work together to abolish nuclear weapons, while also emphasizing the peaceful use of nuclear power and highlighting the IAEA agreement to establish a low-enriched uranium (LEU) bank in Kazakhstan.

In response, Prime Minister Abe stated that he is pleased at the issue of a Joint Statement on a Comprehensive Nuclear-Test-Ban Treaty (CTBT) with Kazakhstan, which shares its special commitment for realizing nuclear disarmament and non-proliferation. Prime Minister Abe also highly appraised Kazakhstan’s signing of an agreement with the IAEA to establish a low-enriched uranium bank, stressing it is a vital step toward achieving nuclear non-proliferation.

Prime Minister Abe stated that it is important to realize an early start to intergovernmental negotiations based on written agreements, so as to obtain specific outcomes of the reforms of the UN Security Council during the current session of the UN General Assembly. Prime Minister Abe also called for the active support and participation of Kazakhstan in regard to this. 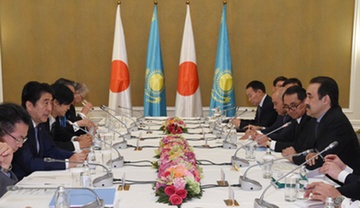 (ii) The two leaders then exchanged opinions on a range of themes in relation to the current situation in the international economy. 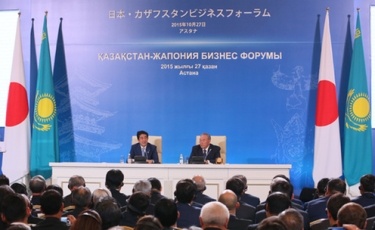 (i) On October 27, commencing at 4:37 p.m. local time for approximately 15 minutes, Prime Minister Abe attended the Japan-Kazakhstan Business Forum hosted by the Japan External Trade Organization (JETRO) and the Japan-Kazakhstan Economic Committee (Secretariat: Japan Association for Trade with Russia and NIS (ROTOBO), in conjunction with the Invest Committee of the Kazakh Investment and Development, Ministry and JSC Kaznex Invest.

(ii) In his greeting, Prime Minister Abe highlighted Kazakhstan’s efforts to diversify its industries and promote the development of small-to-medium enterprises by attracting foreign investment and introducing new technology, and stated that Japan certainly has a part to play in facilitating such economic reforms. Furthermore, Prime Minister Abe pointed out that Japanese companies have extensive experience in expanding their operations overseas in a variety of industries, and are assisting local corporations around the world in hiring and training human resources. Prime Minister Abe stated that he is confident that the vast knowledge of Japanese companies and their contributions to local corporations will be especially of use and great assistance to Kazakhstan in proceeding with its economic reforms.

(iii) This Forum was attended by President Nazarbayev, H.E. Mr. Asset Issekeshev, Minister of Investment and Development, and other relevant parties, approximately 400, from the public and private economic sectors of both countries. In addition to the signing of 15 agreements spanning a wide range of fields, opinions on enhancing Japan-Kazakhstan economic relations were lively exchanged. 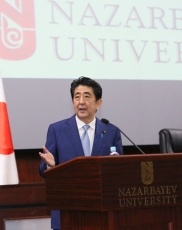 (i) On October 27, commencing at 6:15 p.m. local time for approximately 35 minutes, Prime Minister Abe delivered a policy speech at Nazarbayev University. President Nazarbayev also attended the speech, which was delivered to a large audience comprising of mainly students.

(ii) At the start of the speech, Prime Minister Abe commented on the earthquake that occurred in Afghanistan the day before, expressing his deepest condolences to the victims of the earthquake and extending his sincere sympathies to those who have suffered damage from it. Prime Minister Abe also indicated that as their “friend in Asia”, Japan will provide as much aid as possible to Afghanistan, such as food and medical supplies.

(iii) Following the conclusion of the policy speech, Prime Minister Abe was awarded the title of emeritus professor of political science by the President of Nazarbayev University, Shigeo Katsu.

Page Top
Back to Japan-Kazakhstan Relations