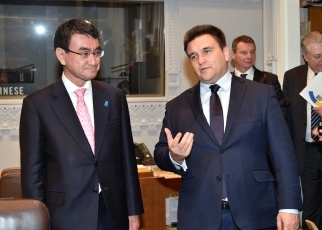 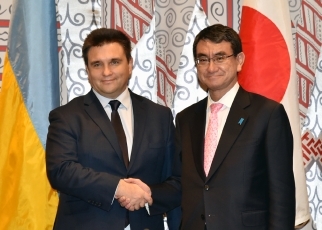 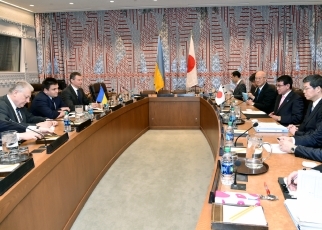 On Friday, December 15, commencing at 5:15 p.m. (local time; 7:15 a.m. on Saturday, December 16, Japan time) for approximately 40 minutes, Mr. Taro Kono, Minister for Foreign Affairs, who was visiting New York to attend the United Nations Security Council Briefing on non-proliferation (North Korea), held a meeting with Mr. Pavlo Klimkin, Minister for Foreign Affairs of Ukraine. The overview of the meeting is as follows.

1. At the beginning, Minister Kono expressed gratitude for Minister Klimkin’s attendance at the UNSC Briefing, and mentioned the progress in the bilateral relationship this year, including the “Year of Japan in Ukraine” that has been held to mark the 25th anniversary of the establishment of diplomatic relations, and the new relaxation of visa requirements for Ukraine. In response, Minister Klimkin highly appreciated the “Year of Japan in Ukraine,” along with voicing his gratitude for Japan’s support for Ukraine and expressing his expectation that the bilateral relationship will develop further in the future.

2. The two ministers both highly appreciated the two countries’ cooperative relationship thus far as non-permanent members of the UNSC, including with regard to the North Korea problem.

3. The two ministers exchanged views widely on the bilateral relationship, the situation in Ukraine, East Asia and the Middle East, and other matters.