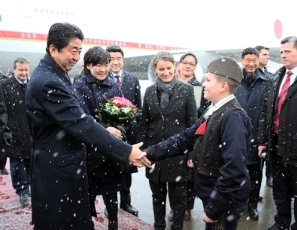 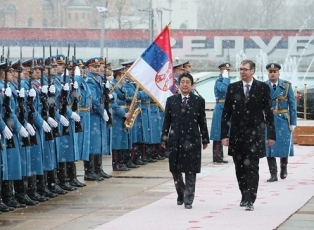 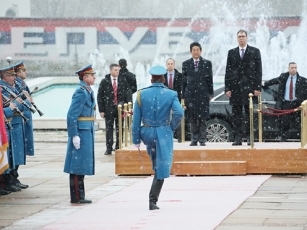 On Monday, January 15, commencing at 3:50 p.m. (local time; 11:50 p.m. on Monday, January 15, Japan time) for approximately 60 minutes, Mr. Shinzo Abe, Prime Minister of Japan, held a Japan-Serbia Summit Meeting with H.E. Mr. Aleksandar Vučić, President of Serbia, during his visit to Serbia. The overview of the meeting is as follows.

(1) Prime Minister Abe stated that the relationship between the two countries has been steadily developing, and welcomed progress with the Flue Gas Desulphurization Project for Thermal Power Plant Nikola Tesla, which is Japan’s first yen loan to Serbia. Prime Minister Abe also mentioned the outcomes of the Japan External Trade Organization (JETRO) mission that Japan dispatched last year, and welcomed the signing of notes on an agreement to dispatch Japan Overseas Cooperation Volunteers (JOCV).

(2) In response, President Vučić explained that Serbia is preparing various preferential measures for foreign investment and has concluded free trade agreements (FTA) with various countries. President Vučić welcomed that Japanese companies are setting up businesses in Serbia due to the advantages it offers in terms of good access to major markets, and explained that he hopes to use this as an opportunity to further advance economic relationship between Japan and Serbia.

2. Cooperation between Japan and the Western Balkans

3. Accession of Serbia to the European Union (EU)

(1) Prime Minister Abe stated that he supports the EU-facilitated dialogue that Serbia is undertaking with Kosovo, and expects both sides play a constructive role in realizing the normalization of relations between Serbia and Kosovo.

(2) In response, H.E. Mr. Ivica Dacic, First Deputy Prime Minister and Minister of Foreign Affairs of Serbia, who was present at the meeting, explained Serbia’s position with regard to the Kosovo issue, and stated that Serbia will strive for peace and stability in the Western Balkan region.

Prime Minister Abe explained that North Korea now poses a threat to all of Europe, including by launching ballistic missiles with a potential range as far as Belgrade, and explained that he hopes to work together with Serbia on various problems facing the international community, including North Korea issue.

The two leaders shared the view that in order to create a situation in which North Korea seeks dialogue after demonstrating concrete action on denuclearization, it will be necessary to use all means to maximize pressure. Prime Minister Abe requested understanding and cooperation on promptly resolving the abductions issue. 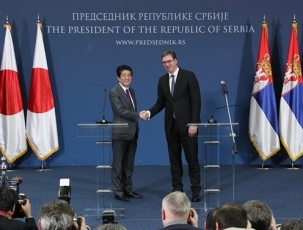 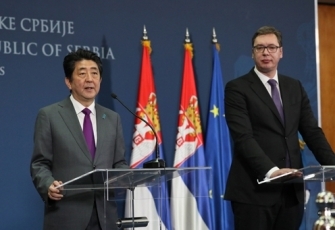 Prime Minister Abe and President Vučić also exchanged views on cooperation in various international arenas and on international affairs, including Russia and China.

Page Top
Back to Japan-Serbia Relations