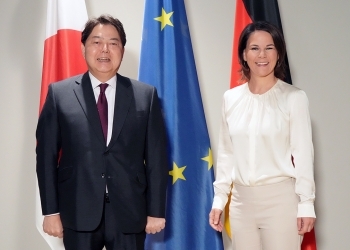 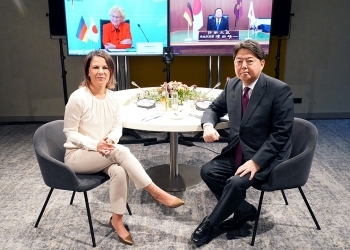 On November 3, commencing at 10:00 a.m. (local time, at 18:00 Japanese time) for approximately one hour and 30 minutes, Mr. HAYASHI Yoshimasa, Minister for Foreign Affairs of Japan, and Mr. HAMADA Yasukazu, Minister of Defense of Japan held the second Japan-Germany Foreign and Defense Ministers’ Meeting (“2+2”) with H.E. Ms. Annalena BAERBOCK, Federal Minister for Foreign Affairs of the Federal Republic of Germany, and H.E. Ms. Christine LAMBRECHT, Federal Minister of Defense, of the Federal Republic of Germany. The brief summary of the meeting is as follows.

Based on shared understanding that the unity of like-minded countries, including Germany and Japan, is required more than ever before amid the shaking of the foundations of the international order by Russia's aggression against Ukraine, both sides welcomed to hold the second Japan-Germany 2+2. Moreover the Ministers concurred to strengthen cooperation toward the realization of a "free and open Indo-Pacific"(FOIP) and to promote concrete measures to deepen Japan-Germany security and defense cooperation, including economic security. Furthermore, in consideration of the succession of the G7 presidency from Germany to Japan next year, the Ministers confirmed to continue to work closely together to share understanding of regional affairs, including the situation in Ukraine and East Asia, and to cooperate in the international arena. In addition, both sides welcomed that the cooperation is making progress, including exchanging views, on the National Security Strategy, which is currently being drafted/revised by both the Japanese and German governments.

2. The situation in Ukraine

3. Cooperation in the Indo-Pacific Region

Both sides welcomed the strengthening of cooperation between the Self-Defense Forces and the German Federal Armed Forces, including the deployment of the Eurofighter to Japan in September, and shared the view on the following three points to further deepen Japan-German security cooperation;

The four Ministers confirmed their intention to arrange the next "2+2" meeting to be held at an early point.