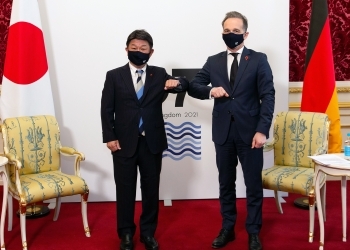 On May 4, commencing at 11:05 a.m. (local time; same day, 7:05 p.m. JST) for approximately 30 minutes, Mr. MOTEGI Toshimitsu, Minister of Foreign Affairs of Japan, who is visiting the United Kingdom to attend the Meeting of G7 Foreign and Development Ministers, held a Foreign Ministers’ Meeting with H.E. Mr. Heiko MAAS, Federal Minister for Foreign Affairs of the Federal Republic of Germany. The overview of the meeting is as follows.

The two ministers confirmed their collaboration and welcomed the strengthening security cooperation between the two countries, including the deployment of a German navy frigate to the Indo-Pacific region. Minister Motegi received support when he asked for understanding and cooperation for the immediate resolution of the abduction issue.

The two ministers exchanged views regarding regional situations, cooperation for the realization of a "Free and Open Indo-Pacific," and other issues in bilateral relations.