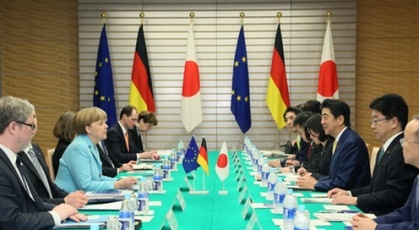 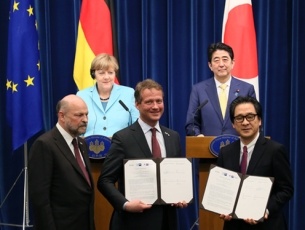 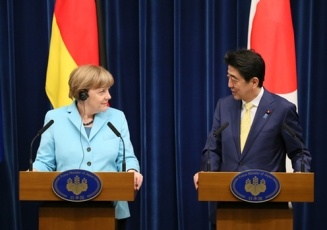 On Monday, March 9, commencing at 4:20 p.m. until 6:30 p.m. for approximately 130 minutes (a small group meeting was held for the first 70 minutes), Prime Minister Shinzo Abe held a summit meeting with H.E. Dr. Angela Merkel, Federal Chancellor of the Federal Republic of Germany, during her official working visit to Japan. The overview of the meeting is as follows.

In addition to the summit meeting, the two leaders visited Nezu Museum (3:40-4:00 p.m.), and received a courtesy call by Japanese and German business leaders (7:05-7:45 p.m.). Prime Minister Abe also hosted a dinner (8:00-9:20 p.m.). As a result, the two leaders spent approximately five and a half hours together, had an in-depth discussion on various global challenges over time, and further deepened their trusted personal relationship.

(1) Prime Minister Abe expressed his great appreciation of Chancellor Merkel’s contributions to achieve peace in Ukraine. The two leaders also shared the view that they will further strengthen the cooperation between the two countries, including support for Ukraine’s domestic reforms, and maintain close contact with each other, holding discussions on a regular basis between the two foreign ministries.

(2) The two leaders had a detailed discussion regarding the situation in East Asia, and shared views on issues such as severe security environment.

(3) The two leaders also shared the view that the two countries will strengthen the cooperation in order to achieve the reform of the UN Security Council this year, the 70th anniversary of the UN foundation, with the G4 framework.

(4) Furthermore, both leaders shared the basic positions that high effective coal-fired power generation will be promoted.

At the beginning, Prime Minister Abe stated that Japan and Germany are partners which share fundamental values, and that he would like to further enhance cooperation through Chancellor Merkel’s visit to Japan. Chancellor Merkel also conveyed that she would be pleased to work together as the G7 chair with Prime Minister Abe, the chair of next year, using this opportunity.

(i) Security
Prime Minister Abe explained Japan’s development of security legislation, and the two leaders shared the view that they will maintain close contact in the field of security cooperation.

(ii) Disarmament and nuclear non-proliferation
Prime Minister Abe expressed his will to cooperate closely in order to ensure the success of the NPT Review Conference this year, the 70th anniversary of the atomic bombings, to strengthen the efforts toward disarmament and non-proliferation, and to realize a world without nuclear weapons. The two leaders also confirmed that they will work together on disarmament.

(iii) Counter-terrorism
Prime Minister Abe expressed his gratitude for the sympathy and solidarity by Chancellor Merkel on the terrorist incident regarding the murder of Japanese, and explained that Japan will actively enhance humanitarian support, strengthen counter-terrorism and create societies against radicalism. The two leaders confirmed that they will discuss counter-terrorism, as a major topic of the G7 Summit.

(2) The G7 and multilateral frameworks

(i) G7
The two leaders exchanged views on G7, as the chair of this year and next year, and confirmed that they will further cooperate toward the success of the Schloss Elmau Summit in June.

(ii) Climate change
Both leaders confirmed the importance of the climate change issues, and shared the view that they will deepen the cooperation toward the success of the COP21.

(3) Cooperation in economic and social fields

(i) Prime Minister Abe explained that Japan’s economic policies of “Three Arrows,” and the two leaders shared the view that they will cooperate in the field of IOT (Internet of Things).

(ii) The two leaders expressed their will to cooperate to reach agreement in principle on the Japan- EU Economic Partnership Agreement (EPA) during this year. Prime Minister Abe also emphasized the recovery from the Great East Japan Earthquake as a top priority issue, and requested understanding and cooperation so that the EU’s restrictions on imports of food as well as other products of Fukushima Prefecture will be eased, based on scientific evidence.

(iii) Demographic change and a society where women shine Both leaders confirmed that promoting women’s participation is essential in societies with declining birthrates and aging populations. They also discussed issues, such as expanding women’s roles in developing countries and cooperation in Summit.

The two leaders welcomed the approximately 150-year history of exchanges between Japan and Germany, affirmed the importance of enhancing the roles of the Japanese-German Center Berlin, which marks the 30th anniversary, and shared the view that the Japan-Germany Forum should be further vitalized. In addition, Chancellor Merkel stated that she highly appreciates the good performance of the Japanese-German Center Berlin. The two leaders also emphasized the importance of further promoting youth exchanges, including exchange of students and young researchers.