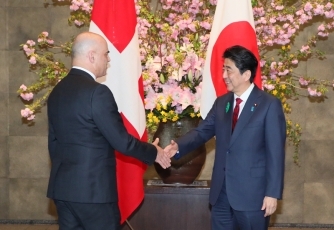 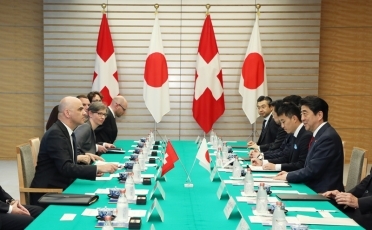 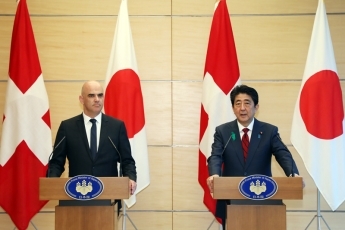 On April 12, commencing at 4:10 p.m. for approximately 40 minutes, Mr. Shinzo Abe, Prime Minister of Japan, held a summit meeting with H.E. Mr. Alain Berset, President and Head of the Federal Department of Home Affairs of the Swiss Confederation, who is visiting Japan. The overview of the meeting is as follows.

(1) At the beginning, Prime Minister Abe welcomed President Berset on his first visit to Japan, and stated that Japan hopes to work on maintaining the free and open international order based on the rule of law together with Switzerland, an important partner with which Japan shares fundamental values.

(2) President Berset stated that Japan and Switzerland share fundamental values and the relationship between Japan and Switzerland has been developing in various fields over the 150 years since the establishment of diplomatic relations, and the two countries have been cooperating on addressing the various challenges facing the international community.

(3) The two leaders also shared the view that they will promote further cooperation in the science and technology field between the two countries, both of which aim to become innovation-oriented nations.

Prime Minister Abe explained the necessity to maintain pressure on North Korea until it abandons all nuclear and ballistic missile programs in a complete, verifiable, and irreversible manner, and the two leaders shared the view that they will cooperate to bring about the abandonment of nuclear and ballistic missile programs by North Korea. The two leaders also shared the view that it is a matter of importance to resolve the abductions issue promptly.

The two leaders shared the view that they will also cooperate within multinational frameworks such as the United Nations and the Asia-Europe Meeting (ASEM).

Page Top
Back to Japan-Switzerland Relations