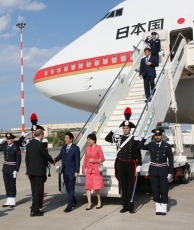 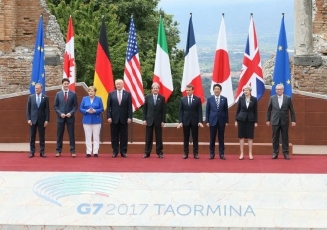 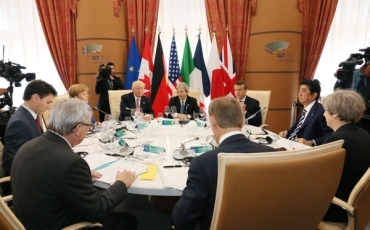 On May 26 and 27, Mr. Shinzo Abe, Prime Minister of Japan, attended the G7 Summit held in Taormina, Italy. An overview of the Summit is as follows. 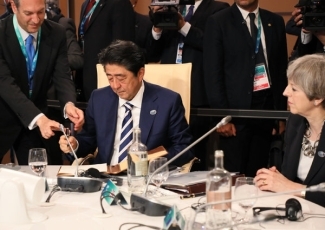 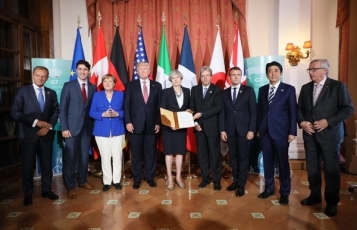 Based on the discussions among the G7 leaders, the G7 Taormina Leaders' Communiqué (English (PDF)

) was released. The following Statement and Annexes to the Communiqué were also released. 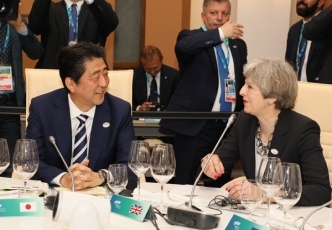 About a half of the G7 leaders, including President Trump, were participating in the G7 Summit for the first time. The leaders held candid discussions on securing global peace and security and realizing inclusive growth of the global economy, amid “a time of change” for the G7, and the deepening of issues such as North Korea, countering terrorism and violent extremism, and refugee issues.

Prime Minister Abe, based on his experience as the Chair of the previous G7 Summit, strongly emphasized the significance of G7 solidarity, as the first speaker, while also leading discussions on issues such as North Korea, the global economy and trade, and maritime security.

The leaders deepened their relationships of personal trust with one another, and agreed that the G7 that shares universal values will respond to the various issues they face with greater solidarity than ever before, as champions of the rules-based international community.

ii) At precisely such a time, the G7 leaders, including newly-participating members, built the foundations of renewed trust and confirmed that the G7, which shares universal values, will demonstrate its solidarity and promote the rules-based international order.

i) North Korea
North Korea is a top priority in the international agenda. The leaders shared the recognition that North Korea poses new levels of threat of a grave nature. The leaders affirmed that the G7 stands ready to strengthen measures to urge North Korea to immediately and fully comply with all relevant UN Security Council Resolutions (UNSCRs) and abandon all nuclear and ballistic missile programs. The leaders also strongly called on the international community to redouble its efforts to ensure the thorough implementation of relevant UNSCRs. Prime Minister Abe also noted the importance of China’s role and underlined the importance of urging China to play a further greater role in applying pressure on North Korea. The leaders also expressed their concurrence with Prime Minister Abe’s call for the immediate resolution of the abductions issue.

ii) Terrorism and Violent Extremism
The leaders strongly condemned the terrorist attack in Manchester in the United Kingdom. The leaders also affirmed the importance of measures on countering the use of the Internet for terrorist purposes, tackling transnational-organized crime, which can serve as a source of financing for terrorists, and other issues. The leaders adopted and signed an independent statement summarizing their discussions.

iii) The Situation in the Middle East
The leaders discussed regional affairs such as Syria, Libya, and Iran, while also taking into account President Trump’s recent visit to the Middle East. The leaders demonstrated their recognition that no effort should be spared to promote a meaningful political process and that all those with influence over the Assad regime must exercise their influence.

iv) Maritime Security
The leaders agreed on the importance of the rules-based order in the maritime domain. They also reaffirmed their commitment to the peaceful settlement of maritime disputes, including arbitration. In addition, the leaders expressed concern about the situations in the East China Sea and the South China Sea, and urged all parties to pursue demilitarization of disputed features. In this context, when China was mentioned in the discussions, Prime Minister Abe stated the importance of relations with China and also that the G7 should urge China to play a constructive role in the international community.

v) Russia
Prime Minister Abe pointed out that the G7 should promote dialogue and engagement with Russia to encourage its constructive engagement. The leaders shared the recognition that the G7 is willing to engage with Russia when it is in the G7’s interest.

i) World Economy
As growth remains moderate and amid the presence of downside risks, the leaders discussed the response of the G7 for realizing higher living standards and quality jobs.

Prime Minister Abe led the discussions and the leaders reaffirmed the G7’s commitment to using all policy tools – monetary, fiscal and structural – in continuation from the G7 Ise-Shima Summit.

For example, the leaders agreed to prioritize high-quality investment, such as in infrastructure, which was a priority issue at the previous Summit. The leaders also adopted the G7 People-Centered Action Plan on Innovation, Skills and Labor. In addition, the leaders reaffirmed existing G7 exchange rate commitments, as agreed upon by the G7 Finance Ministers and Central Bank Governors.

ii) Inequality
The leaders shared the view that excessive inequality, at the national and global levels, represents a major source of concern since it undermines confidence, limits future growth potential.

Prime Minister Abe emphasized the creation of a positive cycle of growth and distribution by promoting innovation and improving productivity, as well as by realizing inclusiveness, in order to sustain growth, and address the concerns and dissatisfaction associated with globalization. Prime Minister Abe also explained that Japan is aiming to realize a society in which all citizens are dynamically engaged, by promoting the active role of women and work-style reforms.

As the G7, the leaders acknowledged that free, fair, and mutually beneficial trade and investment are key engines for growth and job creation, and reiterated their commitment to keep their markets open and to fight protectionism, while standing firm against all unfair trade practices, including the issue of global excess capacity.

The leaders also recognized the importance of the rules-based international trading system, and committed to working together to improve the functioning of the World Trade Organization (WTO) and to achieve a successful 11th WTO Ministerial Conference.

Prime Minister Abe noted the importance of expanding free, fair, and high-standard rules around the world to fairly distribute the fruits of free trade, and expressed the view that, in order to do so, Japan will work on improving the rules-based multilateral trading system as well as promoting bilateral and regional agreements.

The leaders discussed strengthening their collective energy security, as well as harnessing the economic opportunities offered by the transformation of the energy sector and clean technology, and reaffirmed that the G7 must ensure the highest standards of nuclear safety.

The leaders also agreed on the importance of supporting developing countries.

Prime Minister Abe stated that climate change is a global issue that the international community should work together to address, and that it is important for developed countries to exercise their leadership. Furthermore, Prime Minister Abe stated that, in order to do so, Japan intends to steadily implement the Paris Agreement. Many of the other members expressed similar views.

i) Human Mobility and Food Security
Human Mobility: With regard to the ongoing large-scale movement of migrants and refugees, which has become a global challenge, the leaders recognized the need for coordinated efforts at the national and international level, as well as the need for both an emergency approach and a long-term one.

Food Security: Regarding food security, the leaders agreed that ending hunger, achieving food security and improved nutrition, and promoting sustainable agriculture is a crucial goal for the G7, and discussed policies to that end.

Prime Minister explained that Japan intends to address the fundamental causes of migration and refugees, and explained Japan’s related assistances that have been announced to date. Moreover, Prime Minister Abe stated that one of the causes of refugees is food insecurity problems; that it is important to ensure that investment produces benefits for the recipient country, the local people, and the investors; that women have a major role to play in agriculture; and that Japan intends to contribute to food security by enhancing agricultural profitability and productivity, as well as improving nutrition.

ii) Gender Equality
The leaders agreed that gender equality is a top priority for the G7, and that women’s involvement in the economy can have positive economic impacts. The leaders remain committed to mainstreaming gender equality into all our policies. Furthermore, the leaders adopted the G7 Roadmap for a Gender-Responsive Economic Environment, which aims to further accelerate measures for the empowerment of women agreed by the G7 to date, including those adopted at the Ise-Shima Summit.

Prime Minister Abe introduced Japan’s efforts to promote the active role of women, less as a social policy and more as an economic policy. Prime Minister Abe also introduced Japan’s recent development in this area such as new employment of women and its contribution to Japan’s GDP in the past four years, as well as the rapid increase in the number of female Board members at certain publicly-listed companies. Furthermore, Prime Minister Abe explained that the active participation of women and the furtherance of their careers will foster diversity and growth in companies.

4. Overview of the Outreach Session