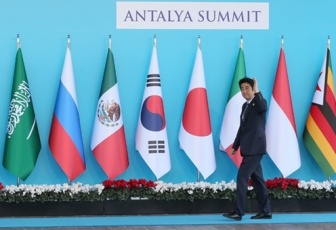 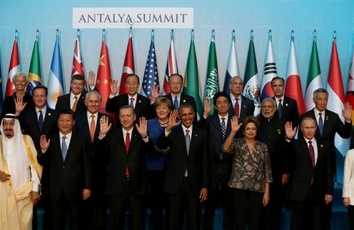 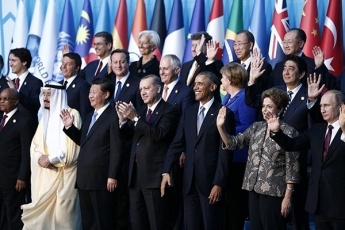 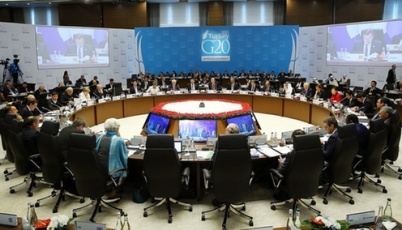 was adopted at the closing of the Summit.

In combination with the G20 Leaders’ Communiqué, the Antalya Action Plan was announced, stating the current status and future plans of countries regarding individual macro-economic policies and growth strategies, in relation to efforts to lift collective G20 GDP by more than 2% by 2018. G20 Statement on the Fight Against Terrorism was also issued. The G20 leaders strongly condemned the acts of terrorism that occurred in Paris at around 6 a.m. on Saturday, November 14 (Japan time), and expressed their solidarity with France.

An overview of the discussions on various topics is as follows. 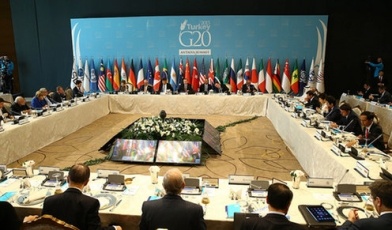 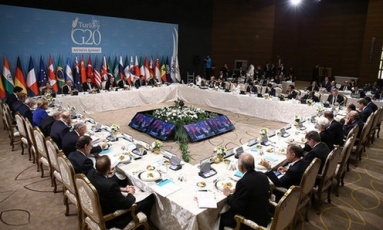 On the topic of global economy, the leaders agreed upon the importance of realizing strong, sustainable, and balanced economic growth through the implementation of the growth strategies.

In the discussion on global economy, Prime Minister Abe stated that stable and balanced growth of the Chinese economy will contribute to the stability of the global economy, and that China needs to eliminate its excess production capacity and carry out reform efforts aimed at resolving economic imbalances and structural issues.

Prime Minister Abe also commented that the G20 countries need to implement comprehensive growth strategies and strengthen initiatives for structural reform, introduced the progress of Abenomics, including promotion of women's participation, and the newly announced "Second Stage" initiatives in particular, and stated his determination to contribute to the growth of the global economy. Furthermore, Prime Minister Abe mentioned that the Trans-Pacific Partnership (TPP), which was recently agreed in principle, is at the core of growth strategies, and that he expects that this will lead to growth for Japan by boosting productivity and vitalizing industries, etc. Prime Minister Abe then briefly introduced the progress of the "Partnership for Quality Infrastructure" that Japan announced in May this year, and explained that Japan will continue to promote quality infrastructure investments.

(a) Financial regulation: The leaders agreed upon recognizing the importance of improving the stability of the financial system to support growth, and affirmed that major financial regulatory reforms have been completed, including total-loss-absorbing-capacity (TLAC) at the time of mega bank failures. The leaders also agreed to continue focusing on the effects of financial regulatory reforms. Prime Minister Abe stated that the appropriate implementation of financial regulatory reforms is important, and that from the perspective of realizing sustainable growth, thoroughly verifying the effects of regulations is necessary.
(b) International taxation: The leaders agreed upon the importance of reaching an agreement on a Base Erosion and Profit Shifting (BEPS) Project, and launching automatic information exchanges related to the financial accounts of non-residents. Prime Minister Abe welcomed the final report on the BEPS Project and stated that he intends to push forward efforts for steady implementation of the agreement while maintaining high quality. He then called upon all of the countries to join the framework for automatic information exchanges.

(a) Development: The leaders agreed upon the importance of supporting and implementing the 2030 Agenda and support for low-income developing countries (LIDCs) in particular. Prime Minister Abe emphasized the importance of quality infrastructure investments from the perspective of development, and stated that Japan will proactively contribute to development issues including health.
(b) Climate change: The leaders affirmed the importance of issuing a strong message aimed at the success of COP21. Prime Minister Abe pointed out the importance of mechanisms to raise ambition related to the reduction of emissions, and stated that Japan will be constructively involved in the formation of agreements.

(a) Trade: The leaders agreed upon recognizing that trade is a driving force behind economic growth and development, and that the World Trade Organization (WTO) serves as the foundation for a multilateral trading system. The leaders also reaffirmed the goal of making the Tenth WTO Ministerial Conference (MC10) a success, and the commitment to the deterrence of protectionism.

Prime Minister Abe stated that he hopes the agreement in principle TPP will lead to strengthening of a multilateral trading system, and introduced the idea that the economic order built by the TPP will serve as a basis for future rulemaking in economic partnerships, and become a global standard in the 21st century. Prime Minister Abe also expressed concern regarding the increase of protectionist measures and called for the countries to thoroughly uphold the rule of law under the WTO at the practical level. Prime Minister Abe added that the countries should aim for concrete outcomes from MC10 and examine the subsequent nature of WTO negotiations.

(b) Energy: The leaders affirmed that improving energy access and energy efficiency is important with regard to energy security. Prime Minister Abe commented on the importance of achieving a pragmatic and well-balanced energy mix, and enhanced the leaders' understanding of Japan's contributions in the field of energy. In particular, Prime Minister Abe explained that Japan will boost energy efficiency, utilize nuclear power as an important base load power source, further spread renewable energy sources, disseminate world-class high-efficiency thermal power generation technologies and energy-saving equipment, thereby making contributions to improving the world's energy efficiency, and contributing to measures against climate change.

(a) Terrorism: The leaders strongly condemned the acts of terrorism in Paris, and agreed that the G20 countries will carry out measures against terrorism in a coordinated manner. Prime Minister Abe emphasized that it is important for the countries to improve their counter-terrorism capabilities, take measures against violent extremism that is the basis of terrorism, and to build societies that do not generate extremism, and explained Japan's initiatives in this area.
(b) Refugees: The leaders affirmed that the problem of refugees is an urgent issue for the entire international community. Prime Minister Abe conveyed Japan's ideas and support measures related to the problem of refugees and emphasized that the international community must provide its utmost support in order to resolve this issue. Prime Minister Abe specifically mentioned the importance of stability enabling all people to live with peace of mind, infrastructure development, and human resource development, etc. 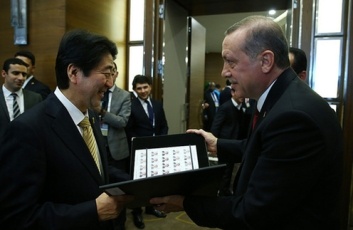 Photo: Cabinet Public Relations Office
The G20 Summit is scheduled to be hosted by China next year and by Germany in 2017.