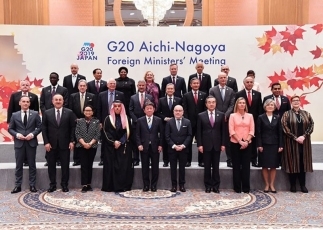 Starting with the Foreign Ministers’ Dinner on November 22nd (Fri), participants engaged in active discussions on urgent issues the international community is facing over three sessions that took place from around 9:00 to 14:30 on November 23rd (Sat). Below is an overview of each session. 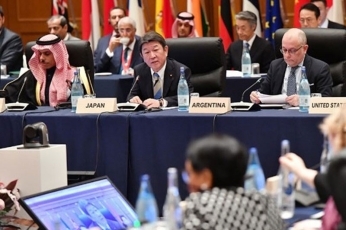 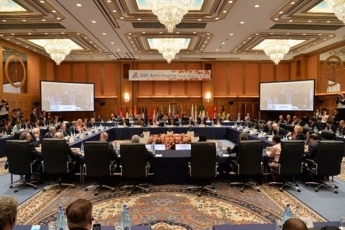 Foreign Minister MOTEGI made an introductory remarks on issues such as how to use recent and rapid advancements in digitalization to bring about economic growth and what issues should take priority in global economic cooperation, policy coordination and development of standards, while the confidence on multilateral frameworks is undermined and trade tensions and geopolitical risks are escalating. Based on it, following points were lively discussed among participants.

First, a number of attendees pointed out the challenges the current multilateral trade system is facing, with some participating members touching upon the need for revisions to unfair trade practices and unilateral measures. Participants also shared the urgent need for immediate WTO reform. In this regard and bearing in mind the 12th WTO Ministerial Conference slated for June next year, the participants confirmed that G20 would demonstrate its leadership in promoting the speedy development of international rules for the digital economy under the “Osaka Track.”

Second, many participants remarked on the importance of implementing and materializing guidelines and standards into concrete policies and systems in areas such as (1) international principles for rules and tax structures on digitalization, (2) global standards for improving the quality of infrastructure investment, and (3) human-centric AI principles.

Third, Foreign Minister MOTEGI introduced Japan’s initiatives as a “flag-bearer of free trade”, including the Japan-U.S. Trade Agreement and Digital Trade Agreement, the Comprehensive and Progressive Agreement for Trans-Pacific Partnership (TPP11), and the Japan-EU EPA. Foreign Minister MOTEGI also explained the significance of concluding Regional Comprehensive Economic Partnership (RCEP), of which negotiations are at a critical stage, with 16 countries. Several countries indicated that such bilateral and regional free trade agreements complement the multilateral trade system and globally promote the establishment of high-quality rules. 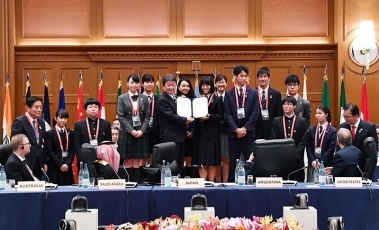 In this session, discussions focused on key areas including the implementation of the SDGs in local areas, mobilizing funding through public-private partnerships, improving infrastructure, enhancing connectivity, education and human capital investment, gender and women’s empowerment.

Each participant stated that it would highly value initiatives agreed upon at the Osaka Summit, including the “Osaka Blue Ocean Vision” on marine plastic litter and the “G20 Principles for Quality Infrastructure Investment”. Representatives also introduced barriers to promoting the SDGs in both domestic actions and international cooperation, good practices in G20 countries to overcome these obstacles, and bilateral cooperation to promote the SDGs.

In addition, based on discussions at the SDG Summit in September, the G20 was able to gain a common understanding on how to steadily monitor and strengthen efforts in areas where progress is delayed and how to accelerate measures for “Decade of Action” by 2030.

At the end of Session 2, representatives from local high schools handed Foreign Minister MOTEGI a proposal on “quality education for all”, one of the goals of the SDGs, calling for the foreign ministers to eliminate educational gaps. Governor OMURA Hideaki of Aichi Prefecture and Mayor KAWAMURA Takashi of Nagoya City were both in attendance.

Based on the outcome of the 7th Tokyo International Conference on African Development (TICAD7) held in Japan in August, discussions in this session focused on the following three areas: (1) economic growth, (2) development and (3) peace and security, keeping in mind the need for the international community to support Africa’s own efforts.

In addition to expressing their high appreciation to and expectations of the outcomes of the TICAD7, participating countries pointed out the importance of working closely among the international community, including the G20. The G20 members also introduced their initiatives, such as forums with Africa, indicating their strong interests in Africa.

It was also an important outcome from this session that the attendees confirmed that the G20 must take up a leading role for the steady promotion and establishment of the G20 Principles for Quality Infrastructure Investment.

3. Succession of the Presidency 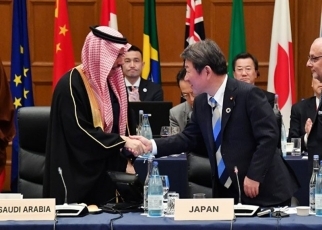 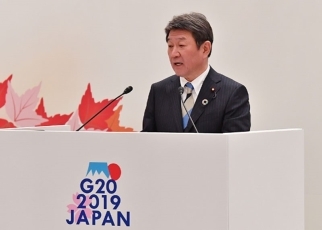 After all sessions, Foreign Minister MOTEGI held the Presidency’s press conference to provide a summary of discussions and express his determination to turn the results and discussions from the Osaka Summit into action and for Japan to continue to demonstrate leadership within the G20 alongside with Saudi Arabia, the next Presidency.