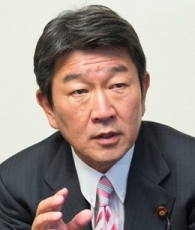 On November 22 (Fri.) and 23 (Sat.), I will host the G20 Aichi-Nagoya Foreign Ministers’ Meeting (FMM). This meeting will focus on three main themes: Promotion of Free Trade and Global Governance; Realizing the SDGs; and Africa’s Development for candid discussions among the foreign ministers.

The session on Promotion of Free Trade and Global Governance will aim to facilitate in-depth discussions on the urgent task of WTO reform and ways to advance rule making process promoted by the “Osaka Track” that was launched on the occasion of the G20 Osaka Summit. I seek to underscore the role of economic partnership agreements, such as Japan-U.S. trade agreement, Japan-U.S. digital trade agreement and CPTPP, which complement multilateral trading system and contribute to the rule making of quality international standards, thus strengthening global governance.

The session on the SDGs is expected to raise the momentum to boost actions towards the realization of the society where “no one will be left behind”, based on the outcomes of the SDG Summit this September. These discussions will take place against a backdrop of the international community facing a critical moment of whether each country can accelerate its own efforts to achieve SDGs.

On Africa’s Development, following up on the outcomes of TICAD7 in Yokohama held in this August, I would like to deepen discussions with my counterparts on ways to further enhance private investment, to provide comprehensive humanitarian/development assistance for sustainable and resilient society, and to support Africa-led peace and security efforts.

These themes all connect to critically important challenges to the international community. Japan has been actively taking initiative in tackling these issues, and I hope to demonstrate diplomatic leadership in closing of the Japanese G20 Presidency, building on what the G20 has achieved at the G20 Osaka Summit.

Aichi-Nagoya is geographically located at the center of Japan and has rich history as a hub for trade and cultural exchanges. Taking the opportunity of the G20 Aichi-Nagoya FMM, I wish to promote attractiveness of Aichi-Nagoya, as a world-leading industrial focal point and one of the biggest trading ports in Japan, as well as a number of historical heritages including the Nagoya Castle.