Mrs. Mariko Suga, the Spouse of the Prime Minister of Japan, visits the United Kingdom 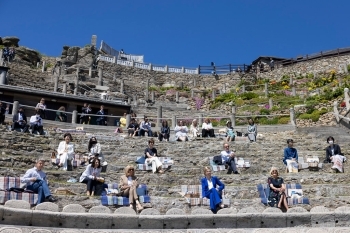 In the afternoon, Mrs. Mariko Suga, the spouse of Prime Minister of Japan, visited Minack Theatre. This theatre was built by an amateur theater enthusiast, Rowena Cade, who spent her life building the theatre by hand. The theatre is a circular open-air theatre on a cliff overlooking the ocean on the Cornwall Peninsula, and it is known for its beautiful stair-like shape.

After being welcomed by Mrs. Carrie Johnson, Mrs. Mariko Suga walked around the theatre with other partners, and they received an explanation about the history of the theatre and tropical flowers planted in the theatre.

After that, Mrs. Mariko Suga watched a musical about the marine environment while having lunch with other partners and talked with the performers.