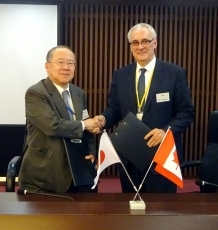 The 14th Japan-Canada Joint Committee Meeting on Science and Technology Cooperation was held on January 29 in Tokyo.

The Joint Committee Meeting was co-chaired by H.E. Mr. Takeshi Nakane, Ambassador for Science and Technology Cooperation of the Ministry of Foreign Affairs of Japan and Dr. Roman Szumski, Vice President of National Research Council Canada (NRC), who served as an acting co-chair for Canada. Attendees included a range of representatives from the relevant ministries and institutions of both countries as well as from the Embassy of Canada in Japan.

During the meeting, both sides exchanged views on the recent developments of national science technology and innovation policies and the current situation of bilateral cooperation. The committee also discussed the situation of cooperation activities and future prospects in specific areas (nanotechnology, health research, high-energy physics & neutrino physics and astrophysics, arctic research, artificial intelligence (AI), aerospace, as well as researcher mobility).

At the meeting, co-chairs signed on the statement of Action Plan for Science, Technology and Innovation, and decided to coordinate specific plans for action in the above areas in the coming month.