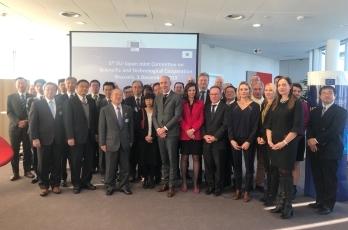 It was attended by representatives from the European Commission, the European External Action Service and Ministries and Agencies from Japan.

Co-chairs noted that research and innovation are among the key areas of cooperation between the European Union and Japan and acknowledged their strategic importance. Both sides explored how the EU and Japan can enhance their cooperation given the priorities of the new Commission, the recent important agreements , as well as in anticipation of significant policy developments over the coming years, Horizon Europe 2021-2027 and the 6th Science and Technology Basic Plan (2021-2025), both of which will be introduced in 2021.

Both sides presented their visions of the new opportunities under the EU-Japan Partnership on Sustainable Connectivity and Quality Infrastructure and shared their intention to work together on concrete steps to ensure its implementation.

Concerning the framework conditions for cooperation, the EU and Japan noted the opportunities created through the Implementing Arrangements, which allow researchers funded by the Japan Society for the Promotion of Science (JSPS) and Japan Science and Technology Agency (JST) to connect with the teams of researchers in Europe supported by the European Research Council (ERC). Both sides shared the recognition on further strengthening the schemes for mobility of researchers including through Marie-Sklodowska Curie Actions.

In line with the Joint Statement of the EU-Japan Summit 2019, both sides reconfirmed their commitment to the EU-Japan Science and Technology Agreement.

Both sides decided to hold the next Joint Committee Meeting in Japan in 2021. The date will be coordinated through diplomatic channels.