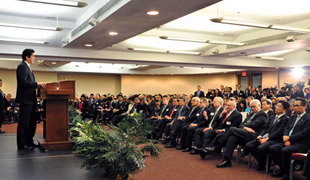 Thank you very much, Dr. Hamre, for your warm introduction. Thank you, Secretary Armitage. Thank you, Dr. Green, and thank you all for joining me today.

Last year, Richard Armitage, Joseph Nye, Michael Green and others published a paper about Japan in which they asked if Japan would end up becoming a Tier-two nation.

Secretary Armitage, here is my answer to you. Japan is not, and will never be, a Tier-two country. That is the core message I am here to make. And I reiterate this by saying, I am back, and so shall Japan be.

The time I spent - five long years- since leaving office as Prime Minister was my time for reflection. First and foremost, I reflected upon where Japan should stand in the future. I didn't consider WHETHER Japan could do this or that. I thought, more often, what Japan MUST continue to do.

Here are the three tasks that were always in my mind.

Firstly, when the Asia-Pacific or the Indo-Pacific region becomes more and more prosperous, Japan must remain a leading promoter of rules. By rules, I mean those for trade, investment, intellectual property, labor, environment and the like.

Secondly, Japan must continue to be a guardian of the global commons, like the maritime commons, open enough to benefit everyone.

Japan's aspirations being such, thirdly, Japan must work even more closely with the U.S., Korea, Australia and other like-minded democracies throughout the region.

A rules-promoter, a commons' guardian, and an effective ally and partner to the U.S. and other democracies, are all roles that Japan MUST fulfill.

I also looked at the globe.
It tells me that as your long-standing ally and partner, Japan is a country that has benefited from, and contributed to, peace and prosperity in the Asia-Pacific for well over half a century. The bedrock for that, needless to say, has been our alliance. It is high time, in this age of Asian resurgence, for Japan to bear even more responsibility to promote our shared rules and values, preserve the commons, and grow side by side with all the high achievers in the region. Japan cannot allow itself the luxury of becoming self-absorbed in its struggle against economic malaise.

My mental globe also told me that Japan must remain a robust partner in the fight against terrorism.

My resolve is even stronger now, after what happened in Algeria: the killing of ten Japanese and three American engineers.

The world still awaits Japan, I thought, in promoting human rights, in the fight against poverty, illness, and global warming, and the list goes on.

That's why, ladies and gentlemen, I stood for office again. That's why I am resolved to turning around the Japanese economy.

I said a moment ago that the Asians are making great progress. With the exception of a single country, I should have added. That exception, of course, is North Korea.

My government, upon their nuclear test, introduced an added sanction against Pyongyang. Their nuclear ambition should not be tolerated. Unless they give up on developing a nuclear arsenal, missile technologies, and release all the Japanese citizens they abducted, my government will give them no reward.

This is not only a regional matter, but a global one. Japan, on my watch, should work tirelessly with the U.S., South Korea, others and the United Nations to stop them from pursuing those ambitions.

Now, if you look at the lapel of my jacket, I am wearing a blue-ribbon pin. It is to remind myself, each and every day, that I must bring back the Japanese people who were abducted by North Korea in the 1970s and 80s. Among them was a girl, Megumi Yokota, who was only thirteen at the time.

That is also the reason why, as a nation firmly behind human rights, Japan must stay strong, strong first in its economy, and strong also in its national defense.

Let me tell you, Japan must be austere as well. Yet, I led my government to increase, for the first time in many years, the budget for homeland defense.

So today, here with you, Rich, John, Mike and all my distinguished friends and guests, I make a pledge. I will bring back a strong Japan, strong enough to do even more good for the betterment of the world.

The Japanese voters have given me a renewed opportunity as Prime Minister to turn my tasks into reality. Each morning, I wake up with a solemn and somber sense of tremendous responsibility.

Now, there is something called "Abenomics." I didn't coin the word. Markets did. It is the name given to my three-arrowed economic booster plan. Japan has been battling deflation for more than a decade. My plan, or "Abenomics," is to put an end to that, first and foremost.

Indeed, it has made a jump start. As the first arrow, I urged the Bank of Japan to do their job, on a dimension they thought they couldn't do. Investors, both Japanese and foreign, have started to buy Japanese shares. Japan's industrial wheels are better greased due to export growth, and Tokyo's stock index has risen as a result.

The second arrow is to carry out a supplementary budget, huge enough to lift the economy by 2 per cent and create 600, 000 jobs.

The third one is about growth strategy. Private consumption and investment will come much sooner than we expected. So far, all the economic indicators point north.

True, we have shot those arrows before, but only timidly, and incrementally. In my plan, the three arrows are being shot strongly, fast and all at the same time. Soon, Japan will export more, but it will import more as well. The U.S. will be the first to benefit, followed by China, India, Indonesia, and so on.

That is not the end of the story, though. An even graver task remains. That is to enhance Japan's productivity. It is to retool Japan's economic structure. Women should be given much greater opportunities. The big savers, mostly the aged population, must be able to give their money with smaller tax burdens, to the younger generation, which is exactly what my government is now doing.

Before I conclude, let me say a few words on China, and then define how I view the Japan-U.S. relationship.

About the Senkakus, first. History and international law both attest that the islands are Japan's sovereign territory. After all, for the long period between 1895 and 1971, no challenge was made by anyone against the Japanese sovereignty.

We simply cannot tolerate any challenge now, or in the future. No nation should underestimate the firmness of our resolve. No one should ever doubt the robustness of the Japan-U.S. Alliance.

At the same time, I have absolutely no intention of climbing up the escalation ladder. In fact, my government is investing more into people to people exchanges between Japan and China.

For me, Japan's relations with China stand out as among the most important. I have never ceased to pursue what I called a "Mutually Beneficial Relationship Based on Common Strategic Interests" with China. The doors are always open on my side for the Chinese leaders.

That leads me to say, finally, a few words on our mutual ties between the U.S. and Japan.

In order for us, Japan and the United States, to jointly provide the region and the world with more rule of law, more democracy, more security and less poverty, Japan must stay strong. That is my first point.

I have started to revisit our National Defense Program Guidelines. Our Defense Ministry will receive an increased budget in order to do just that.

Looking back, it is remarkable that the bond we have developed between Japan and the U.S. has weathered bad days and good, to have lasted for well more than one fourth of the entire history of the United States.

Yet, that should not surprise anyone. The United States, the oldest and the biggest maritime democracy, and Japan, Asia's most experienced and biggest liberal democracy that is also an ocean-goer, are a natural fit. They have been so for many decades, and they will remain so for many more decades to come.

Some say now, that the biggest emerging market is in fact middle-America, like the Dakotas and Carolinas.

So in conclusion, ladies and gentlemen, my task is to look toward the future, and make Japan the second biggest emerging market in the world, and the ever more trusted partner for the region and the world.

The road ahead is not short. I know that. But I have made a come-back, just to take on this task. For the betterment of the world, Japan should work even harder. And I know I must also work hard to make it happen.

So ladies and gentlemen, Japan is back. Keep counting on my country.