Meeting between Mrs. Akie Abe, spouse of the Prime Minister of Japan and Mrs. Isaura Nyusi, First Lady of the Republic of Mozambique 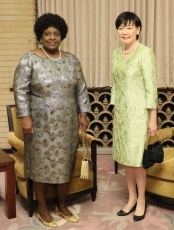 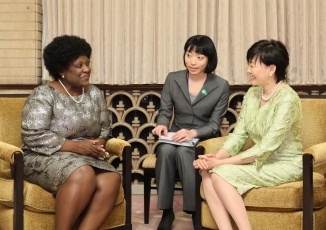 On March 15, Mrs. Akie Abe, spouse of the Prime Minister of Japan, held a meeting with Mrs. Isaura Nyusi, First Lady of the Republic of Mozambique, who was paying an official working visit to Japan.

Mrs. Abe conveyed her pleasure to welcome Mrs. Nyusi to Japan this year, when both countries celebrate the 40th anniversary of the establishment of diplomatic relations.  Mrs. Nyusi responded with her appreciation for the invitation.

Mrs. Abe also mentioned that she had a worthwhile and unforgettable visit to Mozambique three years ago.
Regarding on the visit to Hongoudai Elementary School in Yokohama City on 13 March, Mrs. Nyusi mentioned that her visit was very meaningful, while she had been addressing the issues over children, women, and especially socially disadvantaged people and that, in particular, it was worthwhile for her to observe classes including a fieldwork, where children were growing crops, to have school lunch with good nutrition with students, and to answer many questions from children.  She also mentioned that she was very pleased to learn that Hongoudai Elementary School continues exchanges with Mozambique and would like to transfer her experiences to everybody in Mozambique.  (Notes: Hongoudai Elementary School has been promoting exchange activities with Mozambique since earlier under "One School, One Country" project, which is an initiative being led by Yokohama City.)