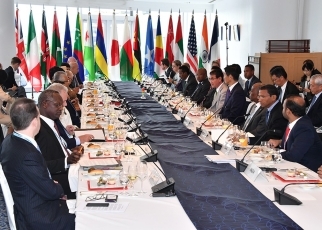 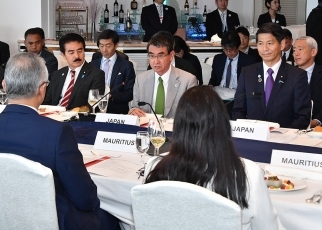 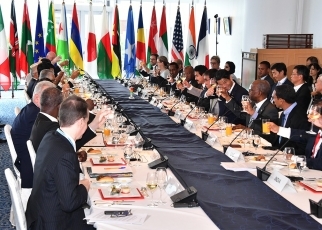 H.E. Mr. Taro Kono, Minister for Foreign Affairs of Japan, attended the Special Conference on Promoting Cooperation in the Western Indian Ocean at 12:30 on August 30 and served as the chair. The overview of the conference is as bellows.

2. At the outset, Minister Kono stated that the Western Indian Ocean is significant sea lanes which connect Asia, Africa and Europe and it is the growth region for pursuing ‘Blue Economy’. Minister Kono also stated that the West Indian Ocean is an essential component for the vision of Free and Open Indo-Pacific (FOIP). On that basis, Minister Kono expressed his commitment to focus on these four points; overcome the vulnerabilities of island nations, promote high-quality infrastructure investment; ensure the sustainable use of marine resources; and secure the marine order in the West Indian Ocean in response to the challenges facing the region.

3. The participants from West Indian coastal countries and partner countries and organizations stated that it is important for the Western Indian Ocean to maintain free and open maritime order and it is necessary to secure sustainable use of maritime resources through, inter alia, strengthening regulation of piracy and Illegal, Unreported and Unregulated (IUU) fishing. The participants shared the recognition that these are in line with the vision of Free and Open Indo-Pacific. In addition, the participants confirmed that they will tackle issues in the West Indian Ocean region while further strengthening their cooperation with international organizations such as the Indian Ocean Commission (IOC) and the Union of North Indian Oceans (IORA).