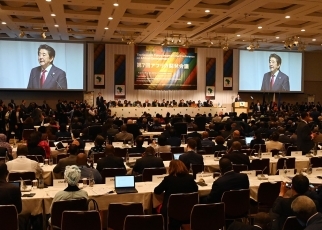 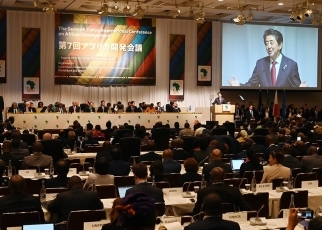 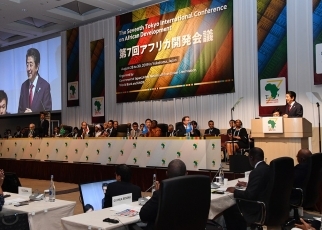 We have now come to the Closing Session of TICAD 7, which has spanned three days beginning on August 28.

The theme for this TICAD 7 is “Advancing Africa’s Development through People, Technology and Innovation.”

Africa is now moving forward with dynamic progress by the rapid increase of a young population, the birth of new businesses one after another through innovation and the conclusion of the African continent-wide free trade agreement.

At this TICAD 7, we have had lively discussions on the image of a new future of Africa from the various positions, such as the African states, Japan, the International Organizations, the other partner states and the civil society.

We have compiled the results of our fulfilling discussions over these three days into the “Yokohama Declaration 2019”and also the “Yokohama Action Plan 2019,” which serves as the concrete guideposts.

I would like to move forward with the solemn process of adopting these outcome documents together with you. I would ask those of you who support the adoption of these documents to kindly applaud.

Thank you very much. With that, “Yokohama Declaration 2019”and the “Yokohama Action Plan 2019,” have hereby been adopted.

Africa was consistently one of the main themes at the G20 Osaka Summit I hosted and the G7 Summit 2019 in Biarritz I attended until just before this TICAD 7.

At this TICAD 7, we followed that flow and succeeded in giving a clear direction for becoming a partner for Africa under dynamic growth.

With regard to the Horn of Africa where the African states themselves have been proceeding with their own actions as well as with regard to the Sahel of Africa, we succeeded in strengthening the solidarity of the international community.

TICAD has been a responsible forum consistently from its establishment in 1993. Japan will continue to steadily implement actions to promote the realization of the “African Union Agenda 2063” in collaboration with other partners.

Furthermore, I introduced dialogues with private companies for the first time at TICAD V. Afterwards, I visited Cote d'Ivoire, Mozambique and Ethiopia, and then Kenya at the time of TICAD VI, together with Japanese companies.

The private sector is also looking at Africa as the “biggest frontier” intensely, while its growth is actually about to be achieved. This is evidenced by the fact that companies, whose number is more than double that at the time of TICAD VI, participated in this TICAD 7.

TICAD was reborn as “New TICAD” that lifts to greater heights the double E’s of “entrepreneurship” and “enterprise,” as well as the double I’s of “investment” and “innovation.”

Japanese companies themselves are growing together with African countries and communities by fostering people and transferring technologies.

The Government of Japan is willing to render assistance to promote further activities of private companies in Africa.

I am now looking forward to seeing fruitful outcomes along with Japan and Africa’s partnership in various ways for making a leap forward in the future.