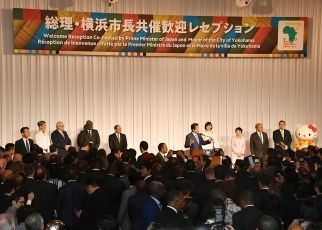 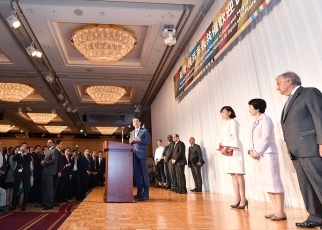 On August 28, at the Yokohama Royal Park Hotel from around 19:00 for approximately 100 minutes, a Welcome Reception was co-hosted by Mr. Shinzo Abe, Prime Minister of Japan, and Ms.Fumiko Hayashi, Mayor of the City of Yokohama, for the Head of States and Organizations assisting the TICAD7.

2. In addition to the participation of Hello Kitty, Special Envoy (Mascot Character) for TICAD, Japanese Drums by DAKO-ON and music by MIYAVI, Goodwill Ambassador at the UNHCR, were performed during the Reception.

3. In view of “local production for local consumption”, many products from Kanagawa prefecture, as well as ingredients produced in the region affected by the Great East Japan earthquake in 2011, such as Fukushima, Miyagi, Iwate Prefectures were used. Vegetarian and halal dishes were also prepared to meet the various dietary needs based on religious beliefs and preferences of the guests.