Statement by H.E. Mr. Taro KONO,
Minister for Foreign Affairs of Japan,
at the Opening Ceremony of the TICAD Ministerial Meeting 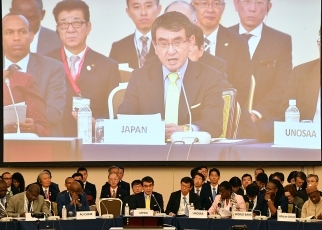 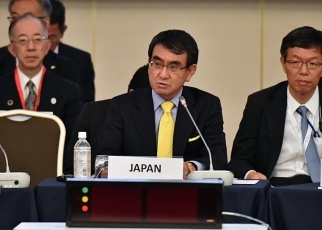 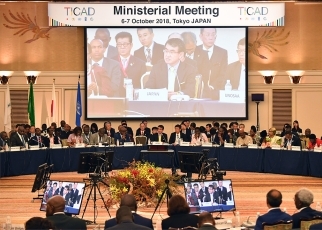 Having attended the United Nations General Assembly last month, I renewed my recognition that the world is facing greater uncertainty than ever before. As we believe Africa would be the most vulnerable region to such a climate, we are fully committed to working shoulder to shoulder with Africa.

It is my great pleasure to welcome my African colleagues to this meeting. I visited Maputo to chair the last TICAD Ministerial Meeting. It was one of my first trips as Minister for Foreign Affairs and the warm welcome I received in Maputo made it all the more memorable. Since then, there have been many significant events to enhance ties between Africa and Japan.

We have also been greatly encouraged by a number of touching messages from African friends in relation to the disasters caused by rains, typhoons and earthquakes that hit Japan over the past years. I would like to once again express my gratitude for those messages of solidarity. Thank you so much.

Our policies towards Africa have been shaped by our own experiences, which can be expressed in our belief that “the strength of a country lies in its people.”

This year marks the 150th anniversary of the Meiji Restoration of 1868, which was a turning point for Japan. In the years that followed, Japan established the basis of its democracy and realized significant development, while emphasizing education, human resource development, socio-economic reforms, and the rule of law.
We also made a miraculous revival after the World War II, thanks to generous international assistance and with self-help efforts based on the resilience we had built since the Meiji era.

Based on this success, as an emerging donor, Japan later applied its unique experience to Asia, which proved to be effective. I would like to reemphasize our firm resolve to further support Africa’s efforts, while respecting Africa’s ownership and focusing on empowerment of its people.

From this perspective, I would like to reiterate that Japan supports democracy in Africa, but at the same time, we highly value Africa’s own efforts to find “African solutions to African problems” in promoting peace and security. Japan appreciates the positive trend in eastern Africa, and stresses the importance of institution building as the foundation for peace and stability.

Japan is promoting proactively to realize a free and open Indo-Pacific, to connect Africa all the way to the coast of North and South America through Indian Ocean and-Pacific Ocean. We must maintain a free and open maritime order and freedom of navigation based on the rule of law. Any maritime disputes should be resolved in a fair and peaceful manner based on international law, but never by force. It is our wish to share such a world with Africa.

On the economic front, we have been promoting African economic transformation with an emphasis on human resource development and technology transfer, in close partnership with our private sector. Reflecting our belief in empowering people, Japanese companies investing in Africa such as TOYOTA and Chiyoda Corporation are training local people in the same manner as they have done in Japan.

Looking at some positive developments, Japan’s foreign direct investment in Africa has increased by more than five times since 2000 and Japanese companies have established more than 800 offices in Africa now. The first Japan-Africa Public-Private Economic Forum was also held in May in Johannesburg and a Public and Private Sector Joint Mission was sent to Rwanda and Zambia in July. It is also encouraging to see the various business side events held yesterday afternoon and this morning, which some of you may have attended. Especially Keidanren, this morning the largest business federation and major Japanese corporations willing to further invest in Africa held a side event. I hope you have attended in the event and talked with Mr. Sakakibara, President of Keidanren about the more investment in your country.

On a related point, I would like to reiterate the importance of sound debt management in order to enable sustainable development for Africa with African ownership. International assistance should be provided in accordance with international standards such as transparency, openness, and economic efficiency, in view of life-cycle costs as well as debt sustainability of recipient countries. These principles are crucial components of Japan’s “Quality Infrastructure” initiative, based on which Japan is supporting enhanced connectivity throughout the entire African continent and beyond. In keeping with these ideas, Japan encourages African efforts toward economic transformation, as provided for in “Agenda 2063.”

To realize Africa’s economic transformation, I would like to refer to the importance of free trade. There is increasing uncertainty surrounding the current international world order and widespread use of unilateral actions is eroding multilateralism. Japan, however, remains determined to maintain and develop free and fair multilateral and plurilateral trading systems.

Now, let us remind ourselves that our TICAD process is created by all stakeholders, including co-organizers, participating countries, international organizations, civil society, and the private sector. Transparency and consistency are both key to this process. I would like to underline Japan’s determination to maintain and further develop this unique, transparent, and inclusive TICAD framework in close collaboration with the participating parties.

Last but not least, I would like to take this opportunity to express my sincere gratitude to you all for your cooperation on certain global issues to which Japan also attaches great importance, such as UN Security Council reform and a comprehensive resolution of outstanding issues of concern regarding North Korea, including the abductions, nuclear and missile development. We hope to work continuously with Africa on these challenges to realize a better future for all.
In the following Plenary Sessions, we will share and discuss how far we have come in terms of the objectives and commitments set at TICADV and TICADVI. Let us make the most of this precious opportunity to listen to the voices of Africa and set course for TICAD 7. I look forward to frank and vibrant discussion in every session.

Before concluding my speech, I would like to announce that even if a group, which claims itself as a “State”, which Japan does not recognize, was sitting in this room, this fact does not mean that Japan in any way implicitly or explicitly recognizes it as state. And I would like to make clear that it is not allowed to put any name plate other than African Union, co-host organization and Japan. It is also not allowed to put any flag other than of African Union, co-host organization and Japan in the Plenary room including on the desk. Anybody who disrupts order may be asked to leave the Plenary room.