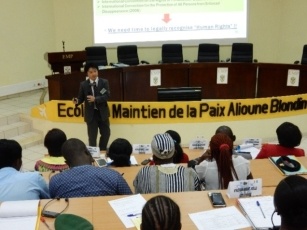 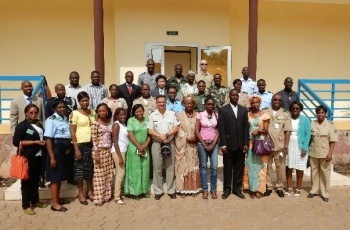 1. The Government of Japan dispatched Mr. Hiroshige Fujii, Programme Advisor of the Secretariat of the International Peace Cooperation Headquarters of Cabinet Office, to Ecole de Maintien de la Paix in the Republic of Mali as an instructor for a Peacekeeping and Gender course which was conducted from June 15 to 19, 2015. 22 participants from 11West African countries appreciated Mr. Fujii's high-quality lecture.

2.  The course was conducted as part of a project which is being implemented with 500,000 U.S. dollars from the Government of Japan through the UNDP-Japan Partnership Fund.

3. Based on the recognition that peace is a prerequisite for development, the Government of Japan has been providing assistance to peacekeeping operations (PKO) training centers in Africa, with a view to enhancing the peacekeeping capabilities of African countries and maintaining the stability of the region. The Government of Japan will continue to provide meaningful assistance towards peace and stability in Africa not only on the financial front, but also by drawing upon Japan's qualified human resources.

(Reference 1) Japan's support for PKO training centers in Africa
Since 2008 the Government of Japan has provided support worth more than 39 million U.S. dollars to 13 PKO training centers in Africa (Egypt, Mali, Ghana, Nigeria, Benin, Togo, Cameroon, Ethiopia (two locations), Rwanda, Kenya, Tanzania and South Africa). Where the dispatch of personnel is concerned, 39 Japanese experts were sent as instructor(s) and/or consultant(s).

(Reference 2) Japan's support for the Ecole de Maintien de la Paix
The Ecole de Maintien de la Paix was established in 1999 with the goal of enhancing capacities of peacekeeping activities in the region. Since 2008, Japan has provided this PKO training center with a total of 3.6 million U.S dollars for improvement of its facilities as well as implementation of trainings in various fields such as Security Sector Reform, Protection of Civilian in Peacekeeping operations, Disarmament, Demobilization and Reintegration and so on. Japan has also dispatched 3 instructors to the center from the Ministry of Defense in 2009 and 2010.

Page Top
Back to Japan-Mali Relations