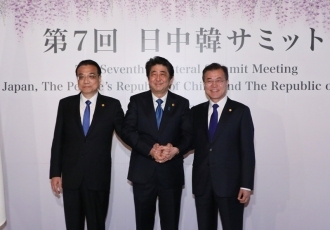 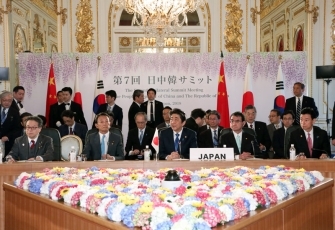 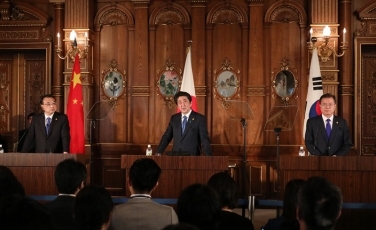 On Wednesday, May 9, from 10:00 to 11:15 a.m., the Seventh Japan-China-ROK Trilateral Summit meeting was held at the Akasaka State Guest House in Tokyo. The overview of the meeting is as follows. (The participating leaders were H.E. Mr. Shinzo Abe, Prime Minister of Japan; H.E. Mr. Li Keqiang, Premier of the State Council of the People’s Republic of China; and H.E. Mr. Moon Jae-in, President of the Republic of Korea (ROK).)

(2) The three leaders who respectively have large responsibility for the peace and stability of the region discussed regional and international affairs such as the issue of North Korea and promotion of free trade, taking into account the fact that this Summit meeting was held at an important juncture prior to the U.S.-North Korea Summit meeting, right after the Inter-Korean Summit meeting.

(2) Regarding the efforts over the last decade, Prime Minister Abe emphasized the spirit laid down in the Joint Statement of the First Japan-China-ROK Trilateral Summit, which stated, "We are determined to pursue comprehensive cooperation --- in the future-oriented manner." He noted that such future-oriented cooperation has steadily advanced; negotiations on the trilateral Free Trade Agreement (FTA) has launched, the Trilateral Investment Agreement entered into force, the number of people-to-people exchange has doubled, 21 ministerial-level meetings have been held since the last summit and over 100 cooperative programs have been implemented, and trilateral cooperation has systemized through the establishment of the TCS. Prime Minister Abe stated that he hoped to get off to a new start of the trilateral cooperation as this year marks the 10th year since the first Trilateral Summit was held.

The three leaders confirmed that the complete denuclearization of the Korean Peninsula is their common goal and shared the view that they will continue to cooperate closely toward the peace and stability in Northeast Asia.

The three leaders confirmed that they will deepen their cooperation toward the dismantlement of all weapons of mass destruction, including nuclear weapons and ballistic missiles by North Korea in a complete, verifiable and irreversible manner in accordance with the relevant United Nations Security Council Resolutions. Prime Minister Abe emphasized that it is necessary to urge North Korea to take concrete actions.

As for the abductions issue, Prime Minister Abe called for the two leaders' support and cooperation toward its early resolution, and gained their understanding.

The three leaders had a frank exchange of views on how North Korea can take the right path and pave the way for its bright future. Prime Minister Abe stated that Japan's resolve to settle the unfortunate past and normalize diplomatic relations with North Korea in accordance with Japan-DPRK Pyonyang Declaration remains unchanged on the condition that North Korea resolves the outstanding issues of concern, namely the abductions issues as well as nuclear and missile issues comprehensively and takes the right path.

The three leaders shared the view to cooperate in regional fora including the East Asia Summit (EAS) and ASEAN+3 and to contribute together to the integration of ASEAN. Prime Minister Abe stated that Japan will promote the "Free and Open Indo-Pacific Strategy."

The three leaders agreed to promote free trade and cooperate toward the early conclusion of the high-quality Regional Comprehensive Economic Partnership (RCEP) and the acceleration of the trilateral FTA negotiation. Prime Minister Abe stated that Japan is steadily advancing the path towards an exit from deflation, by means of Abenomics, which will then contribute to regional and global economic growth by creating a vibrant Japan.

The three leaders agreed on promoting the SDGs and cooperating in the areas such as health and climate change. Prime Minister Abe stated that Japan, China and the ROK should unite and enhance their counter measures against cross border crimes such as terrorism, cybercrime and drug smuggling by deepening their cooperation on border control and capacity building for the third countries among others.