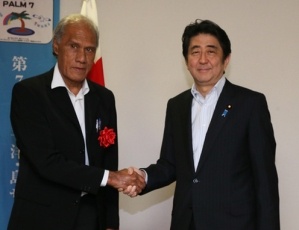 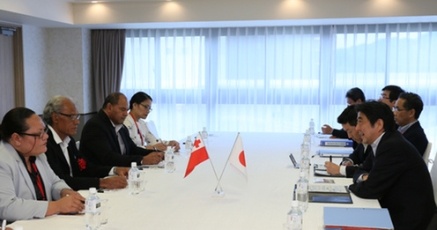 On May 23, commencing at 4:28 p.m. for approximately 15 minutes, Mr. Shinzo Abe, Prime Minister of Japan, held a summit meeting with Hon. Samuela ‘Akilisi Pohiva, Prime Minister of the Kingdom of Tonga, who is visiting Iwaki City, Fukushima Prefecture, to attend the 7th Pacific Islands Leaders Meeting (PALM7). The outline of the meeting is as follows.

1. Prime Minister Abe expressed his congratulations to Prime Minister Pohiva on his being the first civilian to be elected as Tongan Prime Minister and stated that he would like to build closer bilateral relations including the intergovernmental collaboration, just as has been demonstrated in the relations between the Royal Household of Tonga and the Imperial Household of Japan. Prime Minister Abe also expressed anew his gratitude for the support extended by Tonga at the time of Great East Japan Earthquake, and shared his appreciation for being able to host PALM7 in Iwaki City under robust reconstruction, which set a fitting start of a new partnership between Japan and the 14 Pacific Island Countries. Furthermore, Prime Minister Abe conveyed the Government’s intention to provide financial assistance of 3.3 billion yen for port development project in Tonga, adding that Japan would continue to provide robust support for Tonga’s sustainable development.

2. In response, Prime Minister Pohiva highly appreciated PALM7 concluded in great success, while at the same time noting how much he was moved by the warm welcome extended by the people of Fukushima now under vigorous reconstruction. Prime Minister Pohiva also added that he would like to strengthen the cooperation with Japan in a wide range of fields such as education, fishery, trade and sports.

3. The two leaders exchanged views on issues and cooperation in the international community, including climate change, and the UN Security Council reform.

Page Top
Back to Japan-Tonga Relations