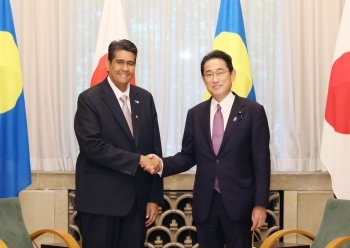 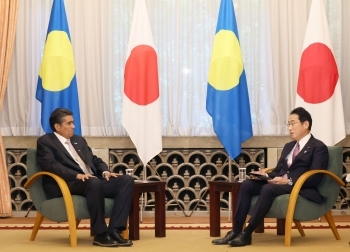 On September 9, commencing at 0:30 p.m. for approximately 70 minutes, Mr. KISHIDA Fumio, Prime Minister of Japan held a summit meeting and a working lunch with H.E. Mr. Surangel S. WHIPPS, Jr., President of the Republic of Palau. An overview is as follows.
The two leaders also issued a Japan-Palau Leaders' Joint Statement.

Prime Minister Kishida stated that Palau is an important partner with over 200 years of interaction, and sincerely welcomed President Whipps' visit to Japan. Prime Minister Kishida expressed his willingness to further strengthen bilateral relations toward the 30th anniversary of the establishment of diplomatic relations between Japan and Palau in 2024.
The two leaders affirmed the importance of solidarity among countries that share fundamental values such as democracy and the rule of law in the midst of a situation in which the foundation of the entire international order faces jeopardy by Russia's aggression against Ukraine, and concurred to cooperate closely with each other.

Prime Minister Kishida explained that through the Pacific Islands Leaders Meeting (PALM) and under Japan’s Pacific Bond (KIZUNA) Policy, Japan has provided cooperation, respecting the agendas of the Pacific Island countries themselves and fully taking into account of their needs, and particularly emphasized on providing assistance to Palau.
Prime Minister Kishida then explained the progress of Japan-Palau cooperation in a wide range of areas in line with the five priority areas of PALM 9, including revitalization of cross-border travel to energize tourism, maritime security, climate change, agriculture and livestock industry, human exchange and human resource development, and the collection of remains of Japanese war dead.
Prior to the meeting, the Exchange of Notes on the Project for the Development of Power Transmission Network, the Grant Assistance between Japan and Palau was signed between Mr. KARASAWA Akira, the Ambassador of Japan to Palau, and H.E. Mr. Gustav AITARO, Minister of State of the Republic of Palau. Also, the memorandum of cooperation in the field of transportation and tourism was signed among Mr. SAITO Tetsuo, Minister of Land, Infrastructure, Transport and Tourism of Japan, H.E. Mr. Charles OBICHANG, Minister of Public Infrastructure, Industries of the Republic of Palau, and H.E. Mr. Ngiraibelas TMETUCHL, Minister of Human Resources, Culture, Tourism and Development of the Republic of Palau. The two leaders welcomed the signings. In response, President Whipps expressed his gratitude for Japan's support in various fields such as infrastructure and education.
In this regard, the two leaders confirmed the progress of bilateral maritime cooperation, including maritime security. Prime Minister Kishida mentioned the port visit by the JMSDF destroyer Kirisame to Palau in July and the goodwill training with Palau patrol vessels, and stated that Japan would continue to support the Palau coast guard authorities, working together with public and private sectors, in improving their capabilities.
The two leaders also concurred to continue close cooperation to ensure the stable operation of Japanese fishing vessels in Palauan waters.
Prime Minister Kishida expressed his gratitude for the Palauan government's cooperation in the collection of remains of Japanese war dead and commemoration project.

3. “Free and Open Indo-Pacific” and the situation in the Pacific Island countries

The two leaders affirmed their close collaboration to realize a "Free and Open Indo-Pacific (FOIP)".
The two leaders discussed the situation in the Pacific Islands region and concurred on the importance of ensuring the unity of the Pacific Island countries, including Pacific Islands Forum (PIF) cooperation.
Prime Minister Kishida stated that in order to further strengthen its support and engagement with Pacific Island countries, Japan would like to firmly promote the PALM process and emphasize coordination with like-minded countries such as “Partners in the Blue Pacific (PBP)”. With regard to the ocean discharge of ALPS treated water, Prime Minister Kishida stated that Japan will continue to work with a high level of transparency, getting cooperation from international society, including with the International Atomic Energy Agency (IAEA) while meeting domestic and international standards for safety. In response, President Whipps noted the efforts that Japan has made since PALM9 and welcomed Japan’s intent of continuing close dialogues through the framework of PIF as well as through bilateral relations, based on its commitment at PALM9.

The two leaders concurred that Russia’s aggression against Ukraine is an outrage that undermines the entire foundation of the international order, and is completely unacceptable.
The two leaders confirmed that the two countries will work together to strengthen the overall functioning of the United Nations, including Security Council reform.
They concurred to strongly oppose unilateral attempts to change the status quo by force in the East and South China Seas. They also concurred the importance of peace and stability across the Taiwan Strait.
The two leaders also exchanged views on the situation in North Korea and confirmed continued cooperation in responding to North Korea, including the nuclear and missiles issue and the abductions issue.
The two leaders concurred to strongly oppose economic coercion and confirmed the importance of transparent and fair development finance.