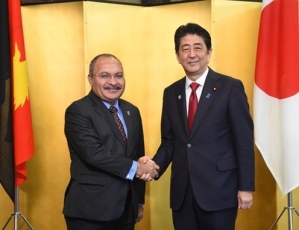 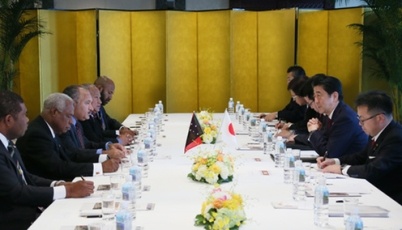 Photo: Cabinet Public Relations Office
On May 28, commencing slightly after noon for approximately 30 minutes, Mr. Shinzo Abe, Prime Minister of Japan, held a Japan-Papua New Guinea Summit Meeting with the Honourable Peter O'Neill, Prime Minister of the Independent State of Papua New Guinea, who is visiting Japan to attend the Outreach Meeting of the G7 Ise-Shima Summit. The overview of the meeting is as follows:

2 In response, Prime Minister O'Neill expressed his gratitude for being invited to attend the Ise-Shima Summit as the representative of the Pacific Island Countries(PICs), and his respect for the outcomes achieved by the Summit, including fostering the sustainable growth of the global economy and support for each country of the region. Furthermore, Prime Minister O'Neill expressed Papua New Guinea's support for the initiatives of Japan for the G7 and the international community, including the Initiative for Expanded Partnership for Quality Infrastructure.

3 Both leaders confirmed their cooperation in economic areas, including on liquefied natural gas (LNG) projects and in the fisheries industry.

4 Prime Minister Abe stated his intention to continue to contribute to the sustainable development of Papua New Guinea through the building of quality infrastructure and the development of human resources. In addition, Prime Minister Abe explained that Japan has newly decided to extend grant aid of 1 million US dollars through the World Food Programme in order to address the damage caused by the drought in Papua New Guinea, as well as to provide capacity building for administrative officials and instruments for marching band, in order to support Papua New Guinea's efforts to successfully host the APEC-related meetings in 2018. Prime Minister Abe also expressed Japan's intention to continue to support Papua New Guinea and other PICsin a wide range of fields, including disaster risk reduction and climate change.

6 The two leaders affirmed that they will work together in relation to the Pacific Islands Leaders Meeting (PALM) third Ministerial Interim Meeting scheduled to be held this year. They also exchanged views on cooperation in international fora, including on United Nations Security Council reform, and confirmed the importance of the rule of law at sea in the Pacific Ocean.