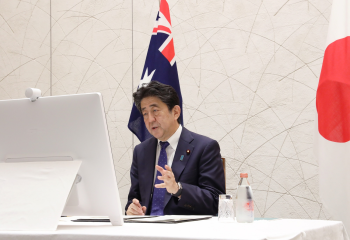 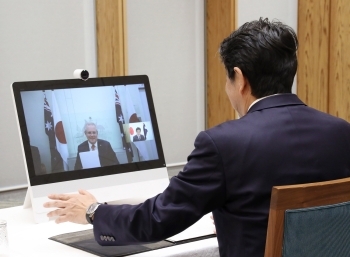 ) was issued as an outcome of this meeting and the overview is as follows. At the beginning, PM Morrison expressed his deepest sympathies towards the victims and those affected by the recent torrential rain disaster.

1. The leaders exchanged opinions on cooperation in response to COVID-19 including measures for economic recovery and other related issues such as economic security, which has become ever more important since the outbreak of COVID-19, and confirmed the strong partnership between Japan and Australia. PM Abe expressed his strong support for Australia’s Defence Strategic Update.

2. PM Abe indicated that the promotion of trade and investment is all the more essential when an early economic recovery is required, and that he looked forward to progress of concrete economic cooperation between Japan and Australia. PM Abe said he would like to continue cooperating in getting the RCEP signed by the end of the year and realizing India return to the Partnership, in order to expand regional trade and investment which contributes to economic revitalization. Furthermore, the leaders concurred to continue to coordinate in order to start a trial cross-border travel arrangement for a small number of mainly business people as exceptional case between the two countries.

3. Towards realizing a free and open Indo-Pacific, the leaders reaffirmed their close coordination in various fields and their commitment in particular for supporting their Pacific and Southeast Asian neighbours.

4. Regarding regional affairs, PM Abe expressed his grave concern about the enactment of a national security law in Hong Kong, as it erodes Hong Kong’s autonomy under the “One Country Two Systems” framework. PM Abe also expressed his serious concern about the situation in the East and South China Seas. The leaders confirmed to closely coordinate in these issues. Furthermore, they exchanged opinions on the situation in North Korea and confirmed to work together to fully implement the relevant United Nations Security Council resolutions. PM Abe requested Australia’s continued understanding and cooperation in early resolution of the Japanese abductions issue, and PM Morrison expressed his support.

6. While giving consideration to the situation of the COVID-19, PM Abe said that he looks forward to PM Morrison’s visit to Japan in the nearest possible future to hold a more in-depth discussion. PM Morrison showed his enthusiasm for his visit to Japan and they concurred to arrange it at an earliest possible time.