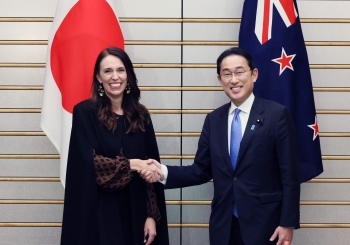 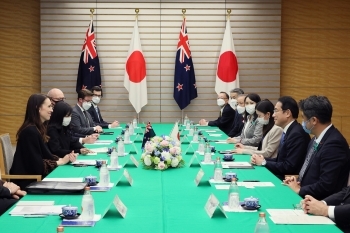 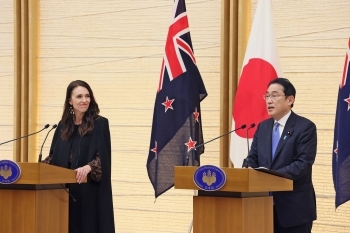 (1) Opening Remarks
Prime Minister Kishida stated that Japan and New Zealand are important partners which share fundamental values, and that he was pleased that Prime Minister Ardern visited Japan in the year marking the 70th anniversary of establishment of Japan-New Zealand diplomatic relations and as one of her first destinations after resuming her overseas visits. The two leaders concurred to further strengthen the "Strategic Cooperative Partnership" between Japan and New Zealand to realize a "free and open Indo-Pacific." In the midst of a situation in which very foundation of the entire international order faces jeopardy caused by such factors as Russia's aggression against Ukraine.

(2) Bilateral Relations
The two leaders concurred to strengthen their bilateral security and defense cooperation amid the increasingly challenging strategic environment in the Indo-Pacific region. In this regard, they agreed to launch formal negotiations for a Japan-New Zealand information security agreement to enhance information sharing between the two countries.
The two leaders also concurred on strengthening coordination between the Japan Self-Defense Forces and the New Zealand Defence Force in the Pacific Islands region, in areas such as capacity building in maritime security, humanitarian assistance and disaster relief. The two leaders affirmed to continue cooperation in the economic field, including on hydrogen-related cooperation towards decarbonization as well as space cooperation, and also confirmed to reinvigorate people exchange between the two countries.

(3) Collaboration in the International Arena
The two leaders strongly condemned Russia's aggression against Ukraine, and concurred to respond in cooperation in a resolute manner with the international community in urging an immediate withdrawal of forces from Ukraine, respecting the rule of law, respecting Ukraine's sovereignty and territorial integrity, opposing any unilateral changes to the status quo by force, and implementing strong sanctions.
The two leaders had a frank discussion on the Comprehensive and Progressive Agreement for the Trans-Pacific Partnership (TPP11), taking into account strategic perspectives. They concurred on the importance of maintaining its high standard and expressed their desire for the United States to return to the TPP.

The two leaders exchanged views on the regional situation and expressed serious concerns about the situation in the East and South China Seas and concurred to oppose any unilateral actions that could escalate tensions in the region.
The two leaders exchanged views on nuclear and missile activities by North Korea and affirmed that they will continue to work closely together in responding to North Korea, including on the abductions issue and the "ship-to-ship transfers."
The two leaders affirmed the importance of strengthening bilateral coordination in the Pacific Islands region and shared the view to work closely with Pacific Island countries and other like-minded countries to ensure peace and stability in the region.
The two leaders also concurred on closely cooperating in the field of nuclear disarmament and non-proliferation including maintaining and strengthening the Treaty on the Nuclear Non-Proliferation of Nuclear Weapons (NPT).