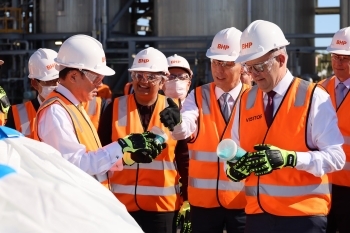 On October 22, commencing at 3:10 p.m. (local time; 4:10 p.m. on October 22 JST) for approximately 40 minutes, Mr. KISHIDA Fumio, Prime Minister of Japan, who is visiting Perth, Australia, visited the BHP Nickel West Kwinana Nickel Refinery with the Hon. Anthony Albanese, MP, Prime Minister of the Commonwealth of Australia. Mr. Mike Henry, BHP CEO led Prime Minister Kishida on a tour of the site. The two Japanese companies, Prime Planet Energy & Solutions and Toyota Tsusho Corporation participated and briefed Prime Minister Kishida on their business activities and future prospects in Australia. This refinery produced nickel sulfate first in Australia, which is used as a material for batteries. The site is critical for Japan's efforts to promote “Battery Industry Strategy,” and also symbolic place for Japan-Australia cooperation in the area of clean energy.

During the visit, Prime Minister Kishida expressed to the Australian participants his hope that the battery supply chain between Japan and Australia will become stronger, and his willingness for the two countries to build a new cooperative relationship in line with the era of decarbonization and work together toward carbon neutrality.

BHP is a major global resources company in Australia. The company's Kwinana Nickel Refinery was the first to produce nickel sulfate crystals in Australia, and the produced nickel sulfate is used as a material for cell batteries and batteries for electric vehicles. Prime Planet Energy & Solutions and Toyota Tsusho Corporation signed a memorandum of understanding for the supply of nickel.