“Next steps of the Special Strategic Partnership: Asia, Pacific and Beyond” 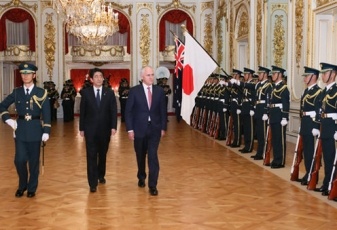 1. Japanese Prime Minister, H.E. Mr Shinzo Abe, and Australian Prime Minister, the Hon Malcolm Turnbull MP, met in Tokyo today for the annual Japan-Australia summit. The meeting strengthened the deep and longstanding strategic, economic and people-to-people ties between the two countries. The Prime Ministers reaffirmed the special strategic partnership between Japan and Australia, based on common values and strategic interests including democracy, human rights, the rule of law, open markets and free trade.

2. The Prime Ministers underlined the importance of deepening the special relationship with a vision to shouldering responsibility for peace and prosperity in Asia and the Pacific and the international society. In this regard, the Prime Ministers expressed their determination to contribute to the establishment and maintenance of international order that respects universally recognised rules and high level of transparency in order to promote unimpeded mobility of people, goods, currency and information.

3. The Prime Ministers were pleased at the substantial strengthening of the economic relationship, including a direct result of the Japan-Australia Economic Partnership Agreement (JAEPA) which entered into force this year. JAEPA has immediately prompted new growth in the trade and investment and opened up new opportunities including in the manufacturing, agriculture and services sectors. They welcomed the collaborative partnership between the two countries such as the identification of Australia as a partner in global food value chains by Japan, searching of potential investment opportunities by Japan in Northern Australia.

4. They also welcomed the conclusion of the Trans-Pacific Partnership (TPP) negotiations, encouraged its signature and entry into force at an early stage, and looked forward to benefits for the stability and prosperity in the region. They shared their intention to work together to support the interest of other economies in acceding to the TPP. They also encouraged the acceleration of the negotiations for the Regional Comprehensive Economic Partnership (RCEP) aiming at a comprehensive and high-quality economic partnership agreement.

5. The Prime Ministers highlighted the critical importance of science, technology and innovation for both Japan and Australia to deliver new sources of growth, maintain high-wage jobs and seize the next wave of economic prosperity. The Prime Ministers welcomed ongoing cooperation projects such as utilising the Quasi-Zenith Satellite System (QZSS) and the signing of a Memorandum of Understanding between Japan’s Forum for Innovative Regenerative Medicine and Austrade, and the commitment by Japan’s key research-intensive universities and Australia’s Group of 8 Universities’ to boost research links. Japan welcomed Australia’s National Innovation and Science Agenda and the Prime Ministers shared their intention to develop specific innovation linkages for announcement at their next summit.

6. Prime Minister Abe introduced Japan’s efforts in the Conference for Promotion of Exchanges between Japan and Australia which aims at innovation-led diversification of industrial structure and region-led promotion of relationship. Prime Minister Turnbull welcomed Japan’s efforts and looked forward to strengthening cooperation in these areas. The Prime Ministers welcomed dispatch of missions to Australia, and further collaboration such as the establishment of periodic high level meetings including on urban transportation and high speed rail, and collaboration in energy including the formation of a diversified, flexible and integrated LNG market. They indicated support for projects such as the Hydrogen Energy Supply Chain Project to help realize the “hydrogen society”. They also welcomed active exchanges by the Sister Cities and other forms of cooperation at the local government level.

7. The Prime Ministers welcomed the outcomes of and joint communique of the Sixth Japan Australia 2+2 Foreign and Defence Ministerial Consultations held on 22 November in Sydney. They endorsed the new initiatives to further enhance bilateral defence engagement. They welcomed substantial progress in negotiations towards making an agreement to reciprocally improve administrative, policy and legal procedures to facilitate joint operations and exercises. They encouraged continued progress, with a view to concluding negotiations at the earliest possible opportunity.

8. Australia welcomed and supported Japan’s recent passage of “Legislation for Peace and Security” which enables Japan to contribute even more actively in securing the peace, stability and prosperity of the region and the world in line with its policy of a “Proactive Contribution to Peace”.

10. The Prime Ministers reaffirmed the contribution of their respective Alliances with the United States to peace and security in the region, and expressed strong support for the United States rebalance. They underlined the value of the Trilateral Strategic Dialogue and the trilateral cooperation between Japan, Australia and the U.S. They also welcomed the inaugural Japan-Australia-India Trilateral dialogue.

11. The Prime Ministers shared the views on a range of regional and international issues as well as contemporary serious challenges such as cybersecurity and welcomed the outcomes of the bilateral cyber policy dialogue. They had a wide-ranging discussion on the global economy, G20, nuclear disarmament and non-proliferation, as well as the role of the U.S., and engagement with key regional countries including ASEAN (Association of South East Asian Nations) member states, China, India, and Republic of Korea.

12. The Prime Ministers urged North Korea to refrain from any provocation, to abide by United Nations Security Council resolutions and the 2005 Joint Statement of the Six-Party Talks, and to fully comply with the IAEA Comprehensive Safeguards Agreement under the NPT. They urged North Korea to address urgently its unresolved humanitarian concerns including the abductions issue.

14. The Prime Ministers will work together to continue strengthening cooperation in regional fora to support security, stability, economic growth and regional integration. They welcomed outcomes of the 10th EAS (East Asia Summit) to strengthen the role of the EAS as the region’s premier leaders-led forum for strategic dialogue and cooperation on political, security and economic issues, and the successful Philippines APEC (Asia Pacific Economic Cooperation) meetings to further deepen cooperation toward open, predictable, rules-based, and transparent environment for trade and investment through such agenda as regional economic integration.

15. Japan and Australia are strong supporters of economic prosperity and stability in the Pacific. The Prime Ministers affirmed their commitment to helping the region achieve a peaceful and prosperous future and will continue close cooperation in the Pacific.

16. The Prime Ministers welcomed the adoption of the Paris Agreement at the 21st session of the Conference of the Parties to the United Nations Framework Convention on Climate Change (COP 21). They expressed their intention to work together for the effective implementation of the Agreement.

17. Unreservedly condemning the recent terrorist attacks which have killed and injured so many innocent people, the Prime Ministers recognised the importance of international counter-terrorism efforts such as the Global Coalition to Counter ISIL. Japan and Australia are providing significant humanitarian support in response to the crises in Iraq and Syria.

18. The Prime Ministers emphasised the importance of an early realization of United Nations Security Council reform, and committed themselves to enhance cooperation to this end.

19. Prime Minister Turnbull conveyed to Prime Minister Abe Australia’s deep disappointment with Japan’s decision to conduct whaling in the Southern Ocean this summer. Prime Minister Abe explained Japan’s position on the legal and scientific grounds for its NEWREP-A programme. The Prime Ministers reiterated that Japan and Australia do not condone any actions which are a risk to human life and property at sea.

21. Prime Minister Turnbull announced Japan as Australia’s public diplomacy Focus Country for 2018. The Prime Ministers were pleased to note enhanced opportunities for people to people linkages. They looked forward to Japan’s hosting of the Rugby World Cup 2019, and Games of the XXXII Olympiad and 2020 Summer Paralympics.