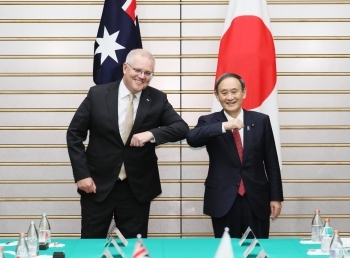 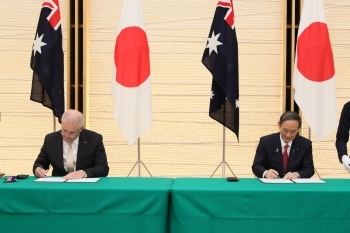 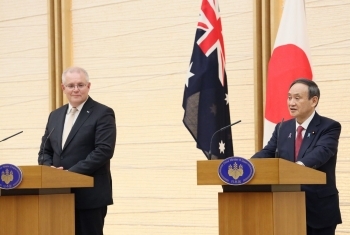 At a joint press conference the same day, the leaders released a joint statement of their intent to further strengthen their cooperative relationship in fields including security and defence cooperation and the economy. [Joint statement(PDF)

The summary of the meetings is as follows.

The leaders met one-on-one, with interpreters, for approximately 20 minutes, where, in a friendly atmosphere, they discussed their background, personal views and their approach to politics.

The leaders affirmed that Japan and Australia, as "Special Strategic Partners" which share the basic values such as freedom, democracy, human rights and the rule of law and strategic interests, will together work toward realizing a "Free and Open Indo-Pacific."

In addition, the leaders instructed their respective Ministers for Foreign Affairs and Defence, with a view to elevating security and defence cooperation between Japan and Australia, to further strengthen bilateral cooperation in this area, through the Foreign and Defence Ministerial Consultations ("2+2") and other mechanisms.

The leaders also concurred to strengthen cooperation on economic security in areas such as telecommunications and critical minerals.

The leaders concurred to continue to work together on reforms at the World Trade Organization, including reforms to the Appellate Body, electronic-commerce rule-making, and the issues of "developing countries." They also welcomed the signing of the Regional Comprehensive Economic Partnership (RCEP) and, through close coordination between Japan and Australia, decided to play a leading role in realizing its early entry into force. The leaders also confirmed that they will continue to cooperate toward the steady implementation and expansion of the Trans-Pacific Partnership (TPP).

The two leaders concurred to promote cooperation in the economic field, including on hydrogen-related efforts.

The leaders exchanged views on the regional situation over dinner.

The leaders welcomed the United States' continued commitment to the Indo-Pacific region and stressed the importance of close cooperation with the United States to contribute to the peace and stability of the region.

On North Korea, the leaders concurred to work together on the full implementation of UN Security Council resolutions, including measures against ship-to-ship transfers. Prime Minister Morrison gave his continued full support for Japan's efforts on the abductions issue.

In addition, the leaders exchanged views on the South China Sea, East China Sea, Southeast Asia and other topics.